Home Arts & Ent. The Revival and Redefinition of the Corset 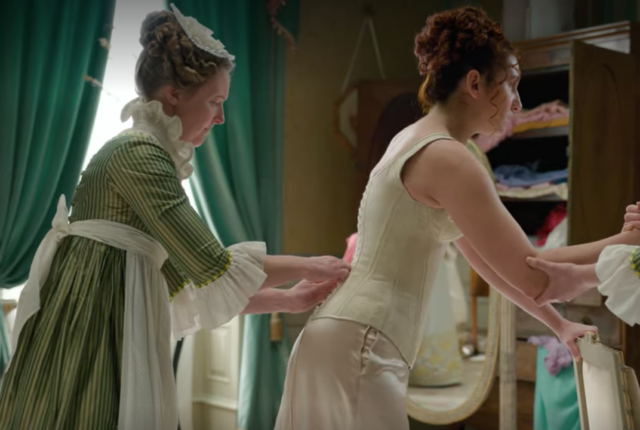 Throughout history, the corset has been a symbol of the confinement of women. Just think of the Netflix show “Bridgerton;” in the first scene of the series, Prudence Featherington is doubling over and struggling to get a good breath as her mother says “I was able to squeeze my waist into the size of an orange-and-a-half when I was Prudence’s age.” Think again to Elizabeth putting on a corset in Pirates of the Caribbean. Time and time again we as an audience have been exposed to corsets as horrible signs of constraint, so why are they making a comeback?

Frances McSherry, a costume designer and theater professor at Northeastern University, insists it is because we are looking for a change; “Today, with the pandemic and everyone wearing sweatpants, it’s all about the contrast. That’s what fashion is about, the new thing, the next thing, the opposite of what we’re wearing now.”

The modern corset is very different from the historical kind in that instead of wearing the corset underneath one’s clothes, it is now worn outwardly and has been fused with the bustier to create something that is more bearable, thus taking the uncomfortable shaping aspect out of the equation.

The Museum at FIT had an exhibit on the history of the corset that demonstrated the shift in psychology that has accompanied this redefinition, going all the way from the 16th century when an iron corset was used as “an orthopedic device to correct spinal deformities” to some more recent pieces inspired by the corset from big names such as Saint Laurent and Vivienne Westwood.

Shae Warman is a TikTok user who makes videos about fashion history and perfectly postulates this redefinition of the historically restrictive garment: “Choosing to wear something just because [someone] wants to wear it…Not having that choice, I think that’s the sign of oppression or forced femininity, and [modern corset wearers] are taking that back and doing what they will with it.”