Home Arts & Ent. The Origin of the Joker 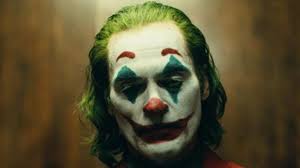 As the camera slowly inches towards a mirror, the audience sees a man putting on makeup. He faces a window which shows the supports of a highway, the eyes of the city always gazing down, always clasping over its inhabitants. As the camera pans in towards the man, we hear sounds coming from the left of the screen; his coworkers playing cards and we experience the man’s loneliness and alienation from society. Now, we begin to make these subconscious assumptions. As we move closer we get a close-up shot of this man; a handheld shot which lends to the intimacy we feel with this character. His facial expressions are unsettling as he proceeds to distort his mouth smiling frowning then smiling again. A tear rolls down his cheek. He is torn. Is his life or rather an existence a comedy or a tragedy? This ultimately is the life of the Joker.

You may know the Joker from the Batman comics and films such as Christopher Nolan’s Dark Knight series. We see this crazed clown and don’t think twice about his origin. As I’ve noticed through the past decades we have had a blatant lack of in-depth character studies in our media. The protagonists on-screen typically have one-dimensional personalities whose lines are synthetic and exist to appease the masses, not to awaken them. In fact, the director of Joker, Todd Phillips, told a Los Angeles Times reported that he was interested in creating a film with a deeply thorough analysis of a person that has to deal with experiences and emotions just like us, just in a slightly more extreme sense! Joaquin Phoenix who plays the Joker was sensational in his role as he prepared months in advance to portray this character. His acting makes the audience sympathize with him and seriously analyze and breakdown his thoughts and emotions. When watching a movie people generally crave a connection to the character and the Joker offers the audience a roller coaster seat to insanity along his side.

As I watched Joker I was stunned to see that it was an ode to 70’s psychological movies such as Taxi Driver and The King of Comedy, two Scorsese films I recommend viewing. But realizing that director Todd Phillips is a Martin Scorsese disciple this fact is no longer surprising. These two films have an in-depth look at their characters who are both played by the exact man who has a defining role in Joker. Since this movie is a must-see, I’ll let you make the decision.