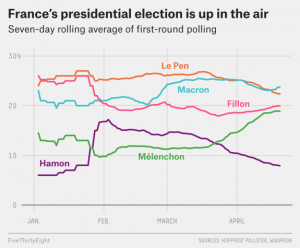 Change. In today’s world where so many desire it’s power, so few actually agree on the “correct” manner in which to embrace it moving forward.

For years, many cried for the end of the normalcy that took roots in our international cooperation and diplomatic relations. Starting on a hot British summer day last year, these people had their voices heard. Following Brexit, in which the Brits narrowly voted to leave the European Union (EU), the world turned to the United States. Here, a candidate with an “outside shot” at winning the election vowed to take the U.S. out of treaties which he, and millions of other Americans, deemed counterproductive.

Now, President Donald J. Trump, and billions of others around the world now look to the French election to see what will be the future of one of the most culturally, politically, and economically influential nations in the world.

But this is not any normal election in Europe. No, the people of France want their own change, and there are several major candidates representing their respective causes.

The current leader and in the lead right now is Le Pen, a far-right nationalist who supports many of the same policies as President Trump does, including a strong focus on illegal immigration and a softening on social issues that go against the grain of her party (i.e. same-sex marriage).

She’s followed closely by Macron, who was part of the socialist party in France until recently and is compared frequently to Bernie Sanders. He supports ideas such as extracting France from many trade deals with foreign countries and weakening ties to the EU. Most notably though, Macron has proposed to strengthen ties with Russia, a proposition that is reminiscent of Donald Trump’s former rally cries.

In last place right now are Melenchon and Fillon. The former is a far left candidate that supports many big government and socialist ideas while the later is quite the opposite as he is part of the French Republican Party, which is very similar to its American counterpart.

Of these top 4 candidates, all but one supports leaving the EU and NATO as well as making closer ties to Russia. Whatever happens in the next couple of weeks will influence the balance of power in Europe and the World. France has cried for change and, undoubtedly, that’s what the world will get.