Home School News Man Travels Around the World on A Bike 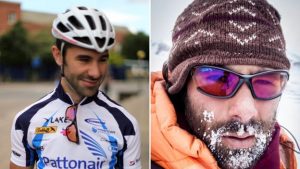 ril 22nd, Leigh Timmis, a 35 year old British man, will be returning home from a seven year long bike ride through the heart of each continent in the world.

Many may be wondering what could possibly possess a young man to waste so much time in his life simply riding a bike. However, for Leigh it was much more. At the age of 28, Leigh felt depressed and unable to distinguish his purpose or aim in life. He endeavored on this journey to raise funds for Derbyshire Children’s Holiday Centre, thinking it a noble and useful allotment of his time on this earth. Originally, Leigh mapped out the bike ride in such a way that it would only take two years. However, Leigh did not take into account just how distracting biking through the world could be.

All by himself, with 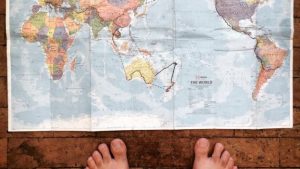 a budget of only $6.50, in American currency, a day that quickly ran out, many would have expected Leigh to have stopped his mission. Yet, when asked why he did not stop, according to BBC, he recounts how he “began meeting people – sharing evenings with them and meeting their families.” Through the lessons and comfort he gleaned from those meetings, he knew how to search for the right quick jobs in order to replenish his funds and move along on his way. As his travels continued, he began to think of this mission much less as a race through countries and much more as a stroll through the different cultures of humankind.

On his journey, he ran into many potential dangers, such as a bear in Canada and a dry spell in Australia, but, amazingly, he never ran into any thieves or criminals, and, if he did, they did not reveal themselves to him. His bike, which he affectionately refers to as Dolly, remained in tact throughout the entire journey. He accredits an “element of trust” universally found in the world for this fortunate reality. He claims his bike holds all the things that he holds dear in this world and that people of every culture can recognize that and respect it.

Regardless of all the amazing sights Leigh has experienced and seen, he claims he is most excited to see his mother at the end of it all. In fact, each day he was gone he wrote a detailed entry in his journal accounting for his time away from home so that his mother would feel like she was there with him.

There is no limit to where the man who has circled the world on a bicycle will end up next. For now, Leigh has plans to become a teacher so he can adequately tell the story of where he’s been and just how beautiful the world, and mankind, can be.