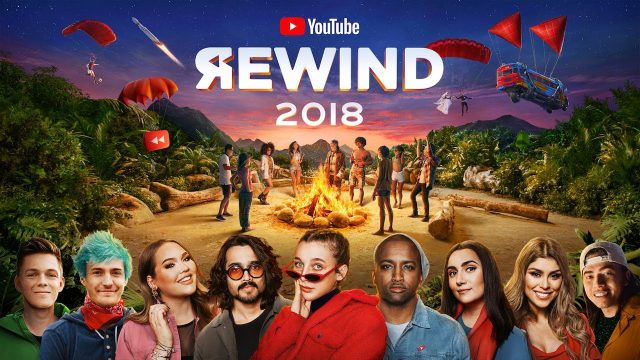 Now that the year is reaching its end, the media is wrapping up their 2018. From Spotify recapping your year in music to BuzzFeed quizzing users about the major events over the course of the past twelve months, most outlets are preparing to start their new year off on a high note. But to add to the end of year wrap of is the iconic YouTube Rewind.

With the first being in 2010, YouTube Rewind sets the stage as an annual recap in video format. It showcases some of the biggest YouTube creators worldwide on this platform and the popular internet content brought about within the year. But unfortunately, last year and especially last year received a great amount of disapproval. With being on YouTube for merely one week, the 2018 YouTube Rewind has quickly risen to become the most disliked video on the platform. Currently boasting 140 million views, it currently has 2.3 million likes and 13 million dislikes. This beats the former most disliked video on YouTube, Justin Bieber’s, “Baby”, with 10 million dislikes. The platform itself has even taken matters into its own hands by removing the amount if thumbs down the video have received. From the comments and reactions from the public, this year’s YouTube Rewind truly disappointed many.

The main focus of this YouTube Rewind was the content creators displayed controlling and manipulating the themes of the video. The video game, Fortnite, that was popularized earlier in the year begins the video alluding to how playing the game and learning its dances was a large component to internet content this year. Individual YouTubers that were featured mentioned a popular idea or theme that was a major part of their channel and career’s development this year. The video also included the Kpop community, which was largely influenced throughout this year and major dance crazes and songs like the “In My Feelings” Challenge.

A lot of the disappointment and major backlash came from the fact that most of the video coverage was short lived and did not feature the most important things that shaped the internet’s atmosphere. The creators featured in the video, although were present, made very brief appearances where they were hardly visible. Although this year’s YouTube rewind received a mass dissatisfaction, there were some positive outcomes to the video. New and upcoming content creators were featured to expand their popularity.  Additionally, the themes of improvement and unity were showcased to empower the internet community and those who have been going through tough times. No matter the opinion of YouTube Rewind 2018, it left its mark to end off the year and will go down in internet history.