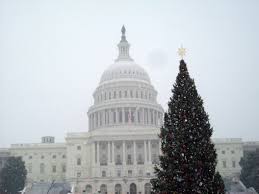 The year 2018 was a year of progression and controversy. During this holiday season, people take the time to reflect on the year and discuss politics. This usually leads to heated debates of partisanship and difference in political ideologies. Make this year different. Take the time to focus on the good and all that was accomplished.

This year was arguably the year of the woman. Women in Saudi Arabia started hitting the road after the country repealed its ban on female drivers in 2017. The objective of having women drive in Saudi Arabia has been around for decades.

Tammy Duckworth made history as the first U.S. senator to give birth while in office and as the first senator to have a newborn at her side while casting a vote on the Senate floor. In our society, being an elected official during motherhood is now accepted and embraced.

Marsha Blackburn became Tennesse’s first female elected US senator in the history of the state, despite criticism from Taylor Swift. Alexandria Ocasio-Cortez became the youngest woman ever elected to Congress in our nation’s history. Ocasio-Cortez upset the Democratic establishment when she won New York’s 14th Congressional District, beating Democratic incumbent Joe Crowley. The midterm election demonstrated that the progressive movement is more prominent now, and democratic socialism is a growing ideology.

This year more women ran for office than ever before, and many won their races. Some of these women even made history. Kyrsten Sinema became the first openly bisexual person elected to the Senate. Rashida Tlaib and Ilhan Omar became the first Muslim women to serve in the history of our Congress. Sharice Davids and Deb Haaland became the first Native American women elected to Congress.

The #MeToo activists saw some justice in Harvey Weinstein’s arrest, canceled R. Kelly concerts, and Charlie Rose’s suspension — but there’s still much more work to be done and people to be investigated. Democratic Senator Al Franken resigned over allegations and actions of sexual assault. The faces of the#MeToo  Movement made their presence known throughout this year, especially in the arena of politics and journalism. Numerous hosts and producers at some of the top national networks were accused and forced out over allegations. Comedian and Actor Bill Cosby was tried and convicted of his crimes against his victims. A man beloved by many is now shunned and forced to face justice.

Media censorship and social media biases were addressed when tech officials were called before Congress. Aside from bias, these tech officials, such as Mark Zuckerberg (Facebook CEO), Sundar Pichai (Google CEO), and Jack Dorsey (Twitter CEO), were called to address shadow banning and the presence of bots passing along false information: #fakenews. This is an issue still being discussed and has yet to be formally addressed with action by Congress or the White House. One thing is for certain, that with the media coverage and political oversight and support, an action is to be expected in the upcoming months.

Prison reform is currently being discussed in Congress. A bipartisan prison reform bill is heavily supported by President Trump and has bipartisan support in Congress. The Veteran Affairs Department has seen significant reform and improvement in efficiency as well.

In 2018, the economy made historic highs. Foreign nations increased spending in NATO funds. GDP has risen to heights of 4.2, which hasn’t been reached in years. Unemployment has seen historic lows, including Black and Latino unemployment. Women’s unemployment has been the lowest it has been in over 60 years. The stock market has been soaring and the American public’s portfolios and 401k plans have been profiting a great deal. Millions of jobs have been added, industries are booming, jobs are coming back to the continental US, and millions of individuals have come off food stamps and welfare systems.

This year was also a historic Midterm election year. Prior to the election, the House and the Senate were controlled by a Republican majority. As of January, the Republican House majority will transform into a Democratic majority, and the Senate Republican majority will be strengthened. Historically speaking, voter turnout in midterm elections is lower than presidential election years, but with issues of legalizing marijuana, healthcare, the wall, and judicial and administrative confirmations on the line, voter turnout was significantly higher than usual.

This year was one for the books. There were many historic achievements and advancements. Of course, every year has its ups and downs, but this holiday season, we remember all the good that has happened. Nothing in politics is permanent, aside from our constitution. This holiday season when you’re at the table discussing politics, remember that in our incredible framework of government, we are a blessed nation: diverse in race, religion, creed, and thought.