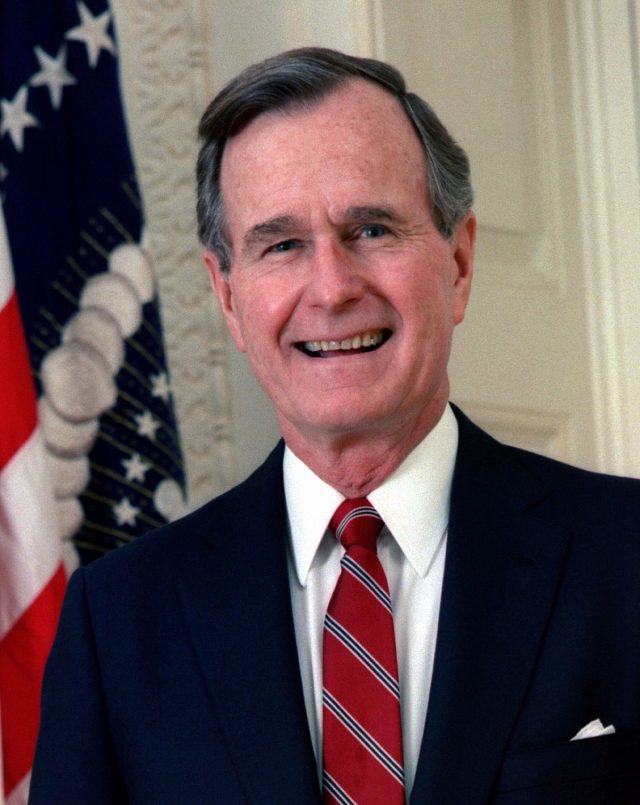 Each President of the United States tends to be labeled as “good,” “bad,” or “great.” President George H.W. Bush was remembered as a “good president.” President Bush enlisted in the Navy shortly after World War II. During this time in the Navy, he and eight airmen were shot down after a bombing raid on Chichi Jima. This event shaped President Bush’s life: “Why have I been spared and what did God have for me?” After World War II, Bush entered Yale University and moved to Texas to begin his career in the oil business. He served as a Congressman, an Ambassador to the UN, Director of the CIA, Vice President under Ronald Reagan, and then a one-term president. President Bush was one of the most qualified people for the presidency having an understanding for military, business, and politics.

During his presidency, Bush maintained a balance between the Democrats and Republicans. President Bush was known for his international success, including defeating Iraq after they invaded Kuwait in the Gulf War, overseeing the collapse of the Soviet Union, starting post-Cold War relations with Russia, and signing the Strategic Arms Reduction Treaty with Russia.

After his presidency, the Bush political dynasty grew. His eldest son, George W. Bush, served as Governor of Texas and later President of the United States. His second son, Jeb Bush, became the Governor of Florida and was a Republican candidate for the 2016 presidential election. On his 75th, 80th, 85th, and 90th birthdays President Bush skydived, even when he was confined to his wheelchair. When Bush was confined to a wheelchair, he was well known for his eccentric socks, starting #socksforbush after his death. In 2018, he gave Marine paramedic Josh Grzb, who has assisted President Bush with daily living from 2015 to 2017, personal letters of recommendation to his medical school, showing his kindness and compassion for those who help others.

His legacy has been preserved through his final resting place and presidential library on the west campus of the Texas A&M University. In the George Bush Presidential Library and Museum, there are 44 million pages of personal papers and official documents related to his career.