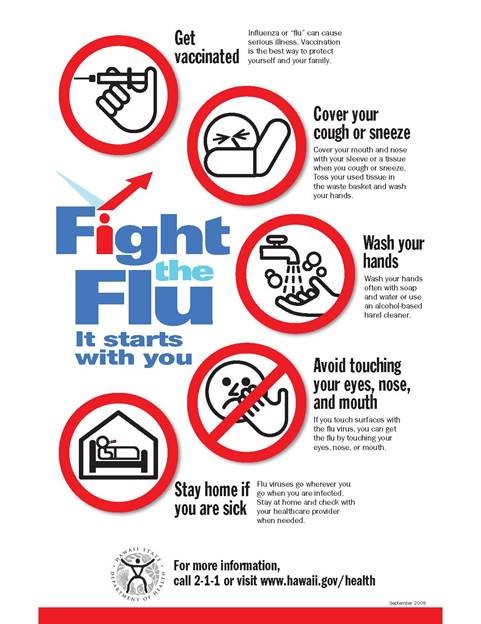 Each winter, 5 to 20% of American bodies are horrifically “snatched” by the invasion of influenza, aka “the flu.” Influenza is not your ordinary cold! It is an infectious respiratory illness that is usually spread through droplets such as the infected sneeze and cough. However, you can also get it by touching and or shaking hands with those affected.

The most common symptoms that indicate your system has been invaded are high fever, cough, severe fatigue, body pain, headaches, sore throats, an upset stomach, and a nose that either craves the Neti Pot or a boatload of soft tissues. Last year, many schools around the country were closed due to the epidemic and over 200,000 people were hospitalized from the complications of becoming infected. According to the Center for Disease Control and Prevention, an alarming 80,000 people died in 2017-2018 from the flu and its complications.

What exactly is influenza if it’s not a really bad cold? It’s a virus. The name influenza was derived from the Italian word “influence” because it was a popular myth that the galaxy “influenced” the flu. However, thanks to science, we now know that the culprit is a smart mutating virus called the influenza virus. Although there are three main flu viruses (A, B, and C), Influenza A has been the most common unrelenting culprit of the three for both birds and humans. Annually, a few strains are identified and a vaccine is developed. The vaccine is recommended by health experts for most healthy individuals over the age of six months. However, there is no guarantee that anyone can be completely inoculated from the virus. Oh, by the way, if you have a nasty allergy to eggs from a chicken, then you may not be able to take this vaccine at all. If you do become infected, antibiotics are no good since this is a virus. An antiviral may be of benefit only in the very early stages. This mainly leaves doctors with supportive care like rest, plenty of fluids, prevention of complications, and fever management. As a result, doctors recommend prevention to be the best cure.

Stay home if you’re sick. Don’t spread the misery. Use hand sanitizers. Cover your mouth when coughing and or sneezing. Talk to your doctor to see if the vaccine is right for you. Luckily in the majority of cases, the flu is just a big unpleasant inconvenience that most healthy people recover from, especially high school students. Hopefully, at High School West all we will be spreading is some holiday cheers during this winter season.