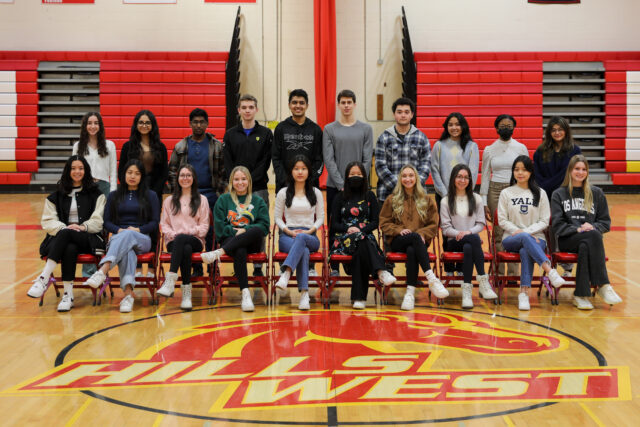 Every year students sit at their desks listening as the teacher goes about their lessons. But it all comes to a stop as an announcement begins—the top twenty students of the senior class.

This tradition is in place to acknowledge and celebrate the hard academic work of these respective students. And while this list tends to follow an even division of males and females most years, this year completely changed that with a ratio of 15 girls to 5 boys.

This year’s valedictorian, Arra Ju, shared that “in a society where aspects such as STEM occupations or leadership roles are male-dominated, I am glad to see the representation of women in education. I am proud but not surprised!”

She alone has faced some discrimination and “surprised reactions” to being valedictorian and receiving honors in math and science-based solely on her gender. These reactions mostly came outside of school from people who would ask, “wait, the valedictorian isn’t a guy?” or “was the salutatorian at least a guy?”

A hundredth place shy of a 99 average, with a drive and passion for STEM, Arra has indeed worked her way to the top. She credits the contributions of her family, specifically her sister. “My sister would instill confidence in me and remind me I’m capable of what I put my mind to!”

Her sister would also help her map out studying patterns and encourage healthy studying patterns, which is key to being academically successful. “If I were to list all the things she has done for me, I would go on and on! Long story short, she’s the reason I made it,” Arra shared. But she also credits herself for putting in the time and effort to get to where she is.

Michelle Piao, the salutatorian, has additionally worked hard to get her spot. She explained that “when it was announced, I didn’t really know how to react, so I just sort of stood there while everyone around me was freaking out.” She claimed that these people, her fellow AP classmates, motivated her to put in the effort to get to this point.

However, she also acknowledges her mother’s undying support, explaining that “even when I didn’t do so well or struggled to manage all of my responsibilities, she wouldn’t harp on my failures but would support me through them.”

And with this year’s dominance of females, Michelle states that “I think it’s pretty cool that it turned out this way; I’m not really that surprised though given how hard working a lot of the girls in the top twenty are.”

Roya Barakzai, a Brown-bound student in the top twenty, expresses joy towards the young women in the top twenty. “They are some of the most hardworking women I know, and I am so glad their hard work has paid off.” She has additionally worked just as hard to get her spot in the top twenty and at Brown.

“As soon as I found out I was extremely excited! Keeping my grades up has always been a priority to me, so seeing the work pay off was greatly gratifying,” Roya explained. She claims that the amount of work put in depends on the class but that it can take as little as 30 minutes or even up to five hours to focus on academics outside of school. “The most time I spent one night on homework/studying was 10 hours!”

Yet it was not only her academic success that contributed to her commitment to an Ivy League school; it has also been her extracurriculars. “I believe the combination of running in both cross country and track the past four years and demonstrating my passions through my selected extracurriculars were the largest contributors,” Roya shared.

But she also credits her family and friends for being a constant source of support for her. “A thank you to all the teachers I’ve had at Hills West. None of this would be possible without their teaching and guidance.”

Another Ivy-bound student, Christina Lee, shared her excitement over being in the top twenty. “I would say my parents and teachers have been the most helpful to my success. My parents have been an immense support system and have encouraged me to achieve my academic goals, and my teachers have always offered so much help.”

She will be attending Yale in the fall after having it become her dream school due to the popular TV show Gilmore Girls. Christina explained that her greatest joy was making her immigrant parents proud since they came to America primarily for the educational opportunities for her and her siblings.

And when it comes to the basis of sex, she explains that “as a female student, I haven’t faced direct discrimination, but I have struggled with self-doubt in my abilities in the presence of male counterparts, occasionally.” This has to do with the STEM field that is dominated by males.

“I think that the social push for women in STEM can be accredited for the larger portion of girls in STEM we see today,” Christina shared. And it has been refreshing to see the number of young women at Hills West who have been studying in this field.

And it is not only Hills West that has seen this female majority in their top twenty. Hills East has a ratio of 14 girls to 6 boys, showing that the HHH district has supported the academic success of young women within “The class of 2022.” It is an inspiration to all the young girls working towards their own educational goals and knowing that it is possible to come together and succeed.

A big congratulations to all of the top twenty. Your hard work and dedication have indeed paid off!