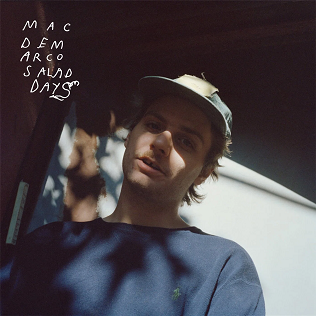 Strange, tacky and slippery are all words to describe the Montreal-based independent artist Mac DeMarco, who is known for his not-so stylish but somehow cool style of torn up vans and thrift flannels, and who can forget about his vintage hat fandom?

Besides Mac’s atrocious but admirably cool, carefree style, he has gained a massive following globally for his interesting live shows and albums. Notably, on April 1st, 2014, the album Salad Days was released, and it was nothing short of Mac DeMarco twang and unusualness, but still maintained the kind of fun seen on previous albums.

One of the two singles released prior to the album, “Passing Out The Pieces,” begins with a haunting blend of what sounds like a synthesizer and an organ–immediately sounding like something off of The Beatles’ Magical Mystery Tour. The other single, “Brother,” features typical Mac DeMarco vibratoed and chorused guitars accompanied by a flooring bassline and simple drum beat.

While the singles certainly stand out from other songs on the album, there are multiple other songs that felt stronger and more developed. For example, “Let Her Go” features an outstanding bassline and a stunning guitar lead that repeats throughout the verses. While the song carries a happy tone, the lyrics say otherwise. Mac gives suggestions of letting go of someone you love throughout the song, ultimately claiming that you really don’t have to listen to him and it is up to you. While the previous songs mentioned were notable and added value to the album, perhaps the most dominant and popular song from Salad Days  appeared towards the rear of the album. “Chamber Of Reflection” begins with a drum beat similar to how Led Zeppelin’s “When The Levee Breaks” starts. Drawn in by this rhythm, the first real sense of this song comes with a soaring synthesizer that dances around the track, while a looming organ flows and a thumping bassline carries the weight of it.

The album Salad Days surprised me. Mac DeMarco introduced awesome synthesizers into his bare-seeming tracks, adding a whole other element to his music. Despite this, I do believe without the tracks I mentioned earlier, this album would be a failure, as it does get a bit tiresome when listening to the full album.