Home Sports Why did the Knicks get Knocked Out of the Playoffs? 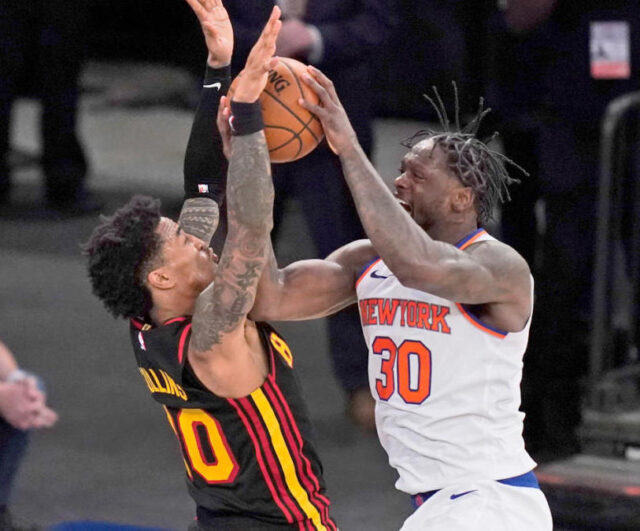 After just five games in the playoffs, the New York Knicks were swiftly dispatched of by the Atlanta Hawks in a deflating 103-89 loss.

Unfortunately for the Knicks, the fans in attendance for game five witnessed the end of the Knicks season. Still, this loss seemed inevitable, as the Knicks were not at the top of their game whatsoever.

Firstly, the Knicks boasted a slew of inexperienced young players who had not yet seen what the playoffs entailed. As such, the pressure got to them, and they underperformed. RJ Barrett, who improved by leaps and bounds this past season, was stifled on his attacks to the rim and bogged down by the pressure of the games. Barrett, who is only 21 years old and was not acclimated to the ruthless environment of the playoffs, was in the same boat as young players like Obi Toppin and Immanuel Quickley. Similarly, Julius Randle and Nerlens Noel were unaccustomed to the roles they were put into and performed weakly.

Also, the New York Knicks seemed less like a cohesive unit and more like a group of pick-up players. A great strength of this Knicks team was their ruthless team defense and mutual understanding of how the offense should work. However, during this playoff run, the Knicks communicated less and were less flexible on the floor. Players would frequently opt for off-platform or heavily contested shots instead of recognizing they had no options. Also, the off-ball players would not move to create separation or facilitate an easy pass. On the defensive side of the ball, the Knicks were disconnected and were frequently caught sleeping, letting shooters open, and showing a reluctance to fight through screens.

Finally, the Knicks lost because of their fans. Though there is nothing wrong with having a passionate fanbase, the Knicks fans took it to the extreme, antagonizing Hawks players and introducing pessimism to the fray. Their treatment of Trae Young made Ice Trae want to go out there and pummel the team. Trae would cook the Knicks time and time again because the fanbase gave him a reason why he should. And currently, the Knicks fan’s treatment of Julius Randle is absurd. Though Randle played poorly against Atlanta, there is no reason to question his play this season. Because of Randle, the Knicks are in the playoffs, and one unfortunate series should not stop the Knicks from taking his player option or negotiating with him further next season for a fair deal. Knicks fans have every right to be worried about Randle’s poor performance, but berating him and rejecting his efforts to return as a Knick is too far.

In short, the Knicks had a disappointing series, but their season proved the team has a bright future ahead of them, but they have to proceed with caution for the time being.