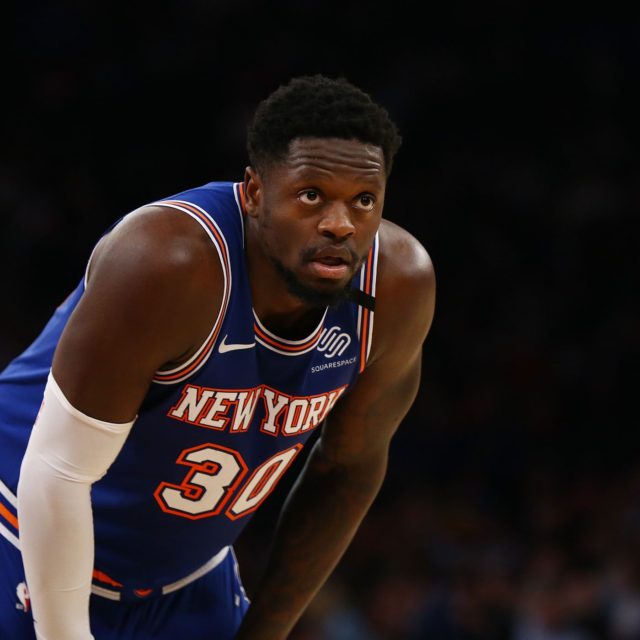 Knicks power forward Julius Randle is in the thick of an all-star campaign. After the Eastern conference starters were announced, NBA fans began to speculate about which players would be named reserves. With the league boasting more talented players than ever before, many players are on the border of all-star selection and all-star snub. One of these players on the bubble is Julius Randle. While Randle is by no means a consensus all-star selection, he should get the nod. His impressive improvements and the Knicks’ new-found success near the half-way point of the season should make him an obvious recipient of the honor. Last season, Randle’s production was plentiful, but his stats were empty. In 2019, Randle was scoring, but not efficiently, barely upping New York’s production. However, in 2020, Randle is putting on a show in his best season thus far. Randle is averaging 23.2 points, 11 rebounds, and 5.5 assists per game on 48% shooting from the field and 41% shooting from three-point range. Looking at basic statistics, we can deduce that Randle is playing some of the best basketball of his career. Randle is out-scoring and out-rebounding fellow all-star candidate Bam Adebayo, along with shooting more efficiently from three than the Heat power forward. Compared to Jimmy Butler, another all-star candidate, Randle out-scores and out-rebounds him, with more efficient splits from the field and three. However, Randle’s contributions also come in the form of advanced analytics. Randle yields an effective field goal percentage of 53.5%, which is not league-leading, but especially impressive for someone that plays such a chief offensive role. Randle’s 3.8 win shares are not particularly attention-grabbing, but the numerical value does not capture his contributions all by themselves. If the Knicks had lost four more contests that slide their record down to 11-20, which displaces them from their current seventh seed to thirteenth in the conference. Randle’s assist percentage also shines among his advanced metrics. When Randle is on the floor, he assists 25.7% of his teammate’s field goals. His ability to find the open man is making the Knicks a better team, with a star player who contributes more buckets than just the ones that he makes. If the stats don’t do it for you, watching a Knicks game should. Randle is a calculated player down low. While last season Randle opted for complicated moves in the paint, he is attacking the rim with vigor and drawing fouls when he realizes defenders can’t contain him. His shooting is more consistent and he is knocking down three’s with an improved shooting stroke. His defense is impressive as well, with Randle becoming a more competent player in his own half under Tom Thibodeau. In short, Randle is in no way the most popular selection for this year’s all-star game, but based on the impact Randle has made night-in and night-out, an all-star shout-out would be a reward that he most definitely deserves.