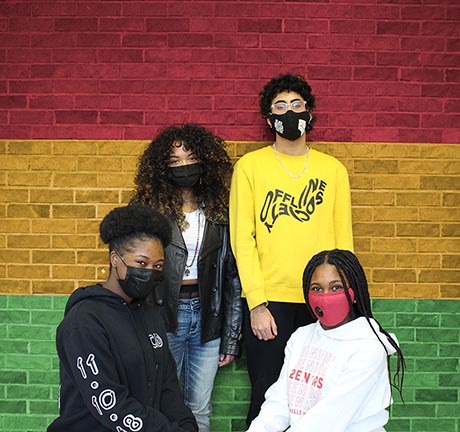 Can’t you smell it coming out of our past?

Through a series of detailed interviews with staff and students, AASO revealed ‘black culture, untold black history, and black excellence around the community’ by weaving together stories of the student body and transforming them into a cohesive, visual story spoken word.

Alexis Nuzzo, treasurer of AASO, revealed that “the purpose of this documentary is for the students and faculty at West to be more aware of the social issues regarding black culture.” With the events that unfolded this past year, correcting and educating the student body on black history and culture becomes essential in understanding our peers

In past years, AASO put on a production in the auditorium filled with students and staff. With COVID and social distancing, this wasn’t possible. Instead, the club opted to record students and staff via Zoom or six feet apart, putting together the school population’s fragments to highlight the black community at High School West.

When designing how AASO would present their annual project, a documentary became the most viable option during social distancing. To Temi Adeola, co-president of AASO, the documentary is meant to “display the excellence and beauty in black culture, starting with our community and fellow peers at High School West,” regardless of if it was in-person or online.

Instead of performing a live play, AASO came up with a more permanent manifestation of their goal through virtual interviews, recorded performances from the STEP team, and pre-recorded speeches and poems — digitizing their work in a typical 2021 fashion. Whether at home or in class, students could cohesively take part in AASO’s annual production, unifying the student body through film

To interview students and staff for the documentary, AASO members recorded Zoom calls. They recorded interviews while staying six feet apart and with masks to follow social distancing protocols. Evidently, Covid has transformed the way we do work. Still, even with the restrictions and limitations, AASO was able to skillfully execute a documentary that incorporated a wide variety of High School West.

Mrs. Simpson, the advisor of AASO, has learned to adapt to this new way of presentation. She stated, “preparation for this year’s presentation has been intense. On top of learning so much technology, it was more challenging being able to reach my students. Before, we would have our practices in the auditorium at least a month before the show. Communication has been a huge issue with preparation for this year’s show. With that said, I am proud to say that I am much more tech-savvy

But the AASO play isn’t the only performance COVID has interfered with. High School West’s step team puts on a captivating, complex, and synchronized performance for the school every year.

Jason Terry, secretary of the step team,  added that “this year’s step performance has not only been different for the audience but also our steppers.” Since the school population is split into cohorts and practices are confined by Covid regulations, the team can only meet once a week on green days for an hour and a half.

“The dynamic of step has been different, but I feel as though the communication within our team has been great, allowing us to learn the step and be cohesive when we meet,” said Terry

Like many students know, the step performance is an integral part of AASO’s annual play, but as Jason admitted, “displaying our routine to a camera as opposed to a live audience has been . . . different. Of course, this year’s performance won’t be physically shaking your seat but rather visually impactful. I believe this step performance will move everyone in a way that was unimaginable before Covid.”

The poem, written by American poet Sonia Sanchez, became the inspiration point for AASO. Alexis Nuzzo explained, “the poem encourages people to think about the fire that kept past generations alive through slavery, racism, and the many socio-economic challenges of being black.

Through Sanchez’s lyrics and the title of the documentary Catch the Fire, AASO’s production allows students to understand a history that isn’t always seen in history textbooks.

Rather than putting a focus on facts and statistics, AASO opted for a much more personal approach. Temi Adeola revealed, “Since it’s a documentary, we could not focus too much on informing but rather telling our story and our experiences.

Additionally, for Black History month, there is an announcement about a black person’s biography every day of February to supplement the documentary and the school’s understanding of black history

Where is your fire?

Where is your fire?

You got to find it and pass it on.

You got to find it and pass it on.

*If you missed the presentation in school, here’s the LINK!