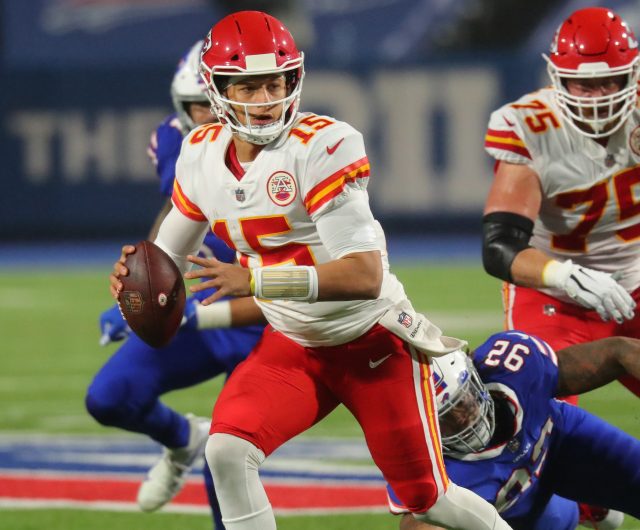 The conference finals are some of the most talked-about contests of the football year. The amount of star power in just two games is exciting, and for hours on end, football fans will be watching eagerly to see who will make the Super Bowl. The Roundup sports staff will also be watching these games with anticipation. Today is a make or break Sunday for some of the contestants. The Roundup Cup is tantalizing close, and today, we’ll see who moves on and who falls flat.

If this is your first time hearing about this competition, here are the rules:

If the winner of the Superbowl is predicted correctly- 4 points

In the event of a tie:

The players will face off in a tie-breaker based on their predicted scores for the Conference finals and Superbowl. The player who has a closer score in 2 of 3 games will be declared the winner.

Coming out of the intense divisional round, both of these teams look good. After being shaken up big hit last week, Patrick Mahomes will take the field for the most crucial game of his season thus far. The Chiefs are a dominant offense with elite players at quarterback, wide receiver, and tight end, but they lack a top-flight defense. While they have great players on the other side of the ball, their defense has always been tabbed as good but not great. The Bills, on the other hand, come into the AFC Championship with wins in the playoffs against the Colts and the Ravens. The Bills lack some of those elite skill positions, compared to the Chiefs, with quarterback Josh Allen and wide receiver Steffon Diggs being the only two that standout. On top of that, the Chiefs also have a better defense than the Bills, letting up fewer points throughout the season and having more interceptions. In the end, this should be a dominating victory by the Chiefs, but it should be a high-scoring affair.

All predictions from Tyler Wichman

The Tampa Bay Buccaneers will face off against the Green Bay Packers in the NFC Championship Game, and the winner will advance to the Superbowl. We will see Brady’s debut in an NFC championship game as his nine previous conference championship game wins were with the Patriots in the AFC. The quarterback of the opposing team is Aaron Rodgers, who is no stranger to the NFC championship. The Packers are loaded on offense with Davante Adams at wideout, Aaron Jones at running back, and of course, Rodgers. The Packers also possess a league-leading defense that has only been getting better with time. The Buccaneers themselves are loaded on offense, and their defense is incredible as well. This matchup took place during the regular season when Brady and his team blew out the Packers. This time around, it is expected that we see a much closer game. I personally see this ending in a down to the wire finish with Rodgers and company getting some sweet revenge. The final score will be 38-37, with the Packers on top.

All predictions from Jordan Cohen:

All predictions from Matthew Pastier:

All predictions from Constantine Lambridis:

All predictions from Christian Sehlmeyer: