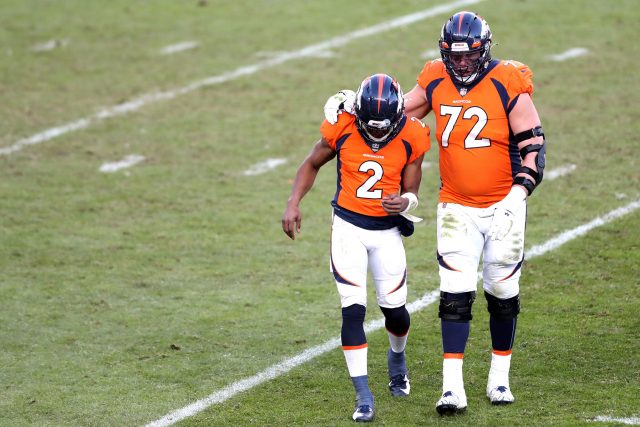 Last week, the Denver Broncos faced a unique situation in which all three of their starting quarterbacks had to leave team facilities and quarantine. Later, we found out the Bronco’s entire quarterback room came into contact with someone who tested positive for Covid-19, and further realized all three of Denver’s eligible QBs would be out for the next game. Amidst the media’s shared laughter surrounding the Bronco’s dire quarterback situation, out of the shadows emerged Kendall Hilton. Hilton, chosen for being a former quarterback at Wake Forest and current wide receiver for the practice squad, would be thrust into the position. As Sunday approached, many questioned if the game would be rescheduled, or if the Broncos would be allowed to pick up a true quarterback. These questions were silenced by the NFL when the organization concluded the game would continue as planned. The Broncos went to the drawing board to decide what offense they can run with the inexperienced Hilton. On game day, many tuned in to see the quarterback-less Broncos versus the league-leading New Orleans Saints. Hilton took the field to the low expectations of analysts, fans, and even teammates.  The odd situation of not having a true quarterback for an NFL game, was unusual, to say the least. Although the Broncos struggled the whole game, and Hilton did not do anything beyond expectation (1 for 9 on pass completions for a mere 13 yards). Hilton undoubtedly gained the respect of league fans and his peers for being able to go out onto the field. Moving forward, the Denver Broncos play the reigning Super Bowl Champion Kansas City Chiefs in a prime-time game this Sunday. The Chiefs will be favored pretty heavily over the Broncos, and will be looking to advance to 11-1 on the season. During this week, the Broncos will release statements regarding their Quarterback situation going forwar