Home Opinion Get Ready for the Food-Induced Coma This Thursday… 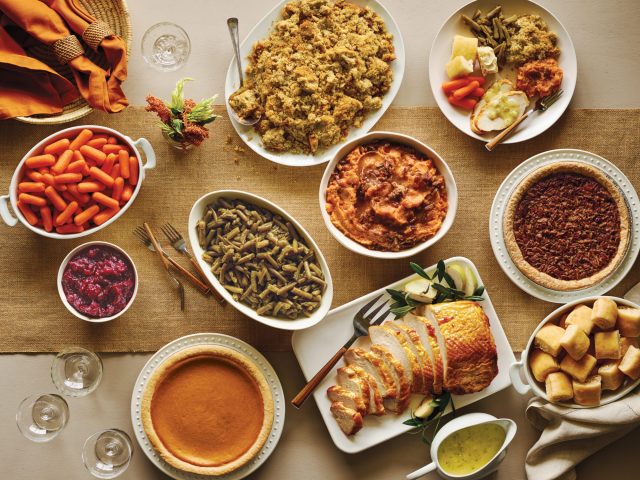 It’s hard to believe that it’s already time for Thanksgiving. Personally, Thanksgiving is my favorite holiday, with family time, the parade, football, and— wait for it— food.

As soon as people think of Thanksgiving, they think of food. It’s the most essential element of the holiday. Of course turkey is the most preeminent part of the meal. However, when it comes to side dishes, there is a wide variety of traditions among families. So, let’s take a look at some of the most popular ones.

Up first we have sweet potatoes. People prepare sweet potatoes in many different ways, and one of the most (surprisingly) popular methods is mashed sweet potatoes with marshmallows. This dish actually has an interesting history. According to an article from Saveur Magazine that was documented by the Library of Congress, the very first recipe for this side was created in 1917. “Marketers of Angelus Marshmallows hired Janet McKenzie Hill, founder of the Boston Cooking School Magazine, to develop recipes designed to encourage home cooks to embrace the candy as an everyday ingredient.” The dish has grown to be a favorite for many, including sophomore Emily Pallan: “I love sweet potatoes and marshmallows because it’s the perfect blend of sweet that complements the turkey very well.”

Stuffing is another necessary part of the quintessential Thanksgiving dinner. This side is made in an assortment of different ways, from the type of bread (or cracker) subject to change, to the way in which it’s served, whether it be in a casserole, a turkey, or by itself. Stuffing contains different ingredients based on the region. Some people in Boston use oysters, in Minnesota, stuffing is prepared with wild rice, and in New Mexico, a corn bread stuffing with Hatch chiles is made.

Another popular side is mashed potatoes with gravy. It’s still unclear as to where the newer type of mashed potatoes originated. Some people say the modern version of mashed potatoes can be traced back to The Art of Cookery by Hannah Glasse in the 18th century (a cookbook that was very popular in Britain and its colonies), while others say the recipe came from Antoine Parmentier, a Frenchman that concocted mashed potatoes with dairy in the late 1700s, even winning a contest for them, according to The Federalist. Sophomore Jessica Salzano says the dish is her favorite because “mashed potatoes are definitely [her] comfort food.”

Thanksgiving food traditions change from family to family, but it’s a well known fact that the food is the key part to this fun-filled holiday.