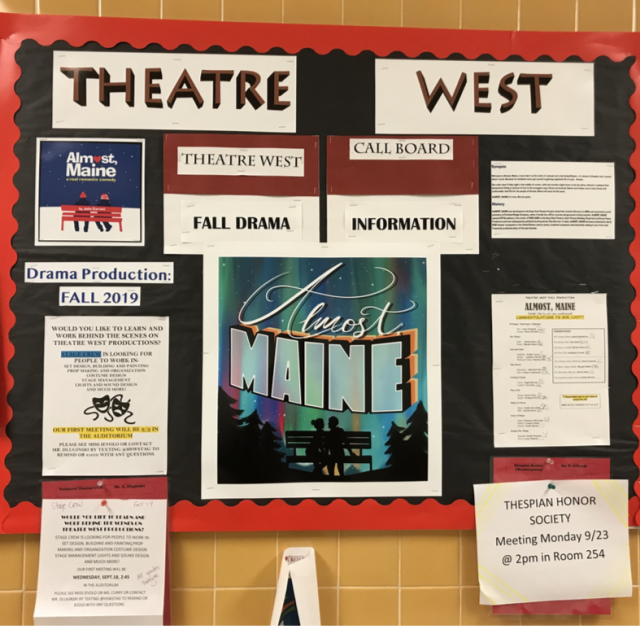 Each year, the students at High School West put on both a fall and a spring production. The preparations for the fall production, which is on November 22nd and 23rd, are already in full swing.

Each year, Ms. Ievolo picks the show that she feels “will be the best fit for our current theatre students that would give them the best opportunities to learn something new about acting and explore complex studies.” This year, the students will be performing “Almost Maine” by John Cariani. According to Ms. Ievolo, “it is a charming group of nine short stories that explore love and loss in a mythical ‘almost-town’ in Maine.” The show was announced in June, at the end of the school year, and auditions were held in the first two weeks of September.

The auditions took place in the auditorium, and those auditioning prepare a monologue from pre-selected choices. If students receive a callback, they have to perform a scene excerpt from the play. In this specific play, there are 19 roles for students to take onstage. Ms. Ievolo said, “This is large for a fall drama. It is usually a smaller group of characters, so I was excited that this show allowed for extra opportunities.” For those looking to get involved without being onstage, there are a variety of roles available in the stage crew. It usually takes a week to go through the whole audition process.

Rehearsals for the fall drama take place every day after school. A typical rehearsal consists of warm-up acting exercises and script analysis. After that, the cast will run through each scene to “create the movement and blocking on stage.” There is a lot of work that goes into producing the fall drama, and it is exciting to see this story come alive on the Hills West stage.