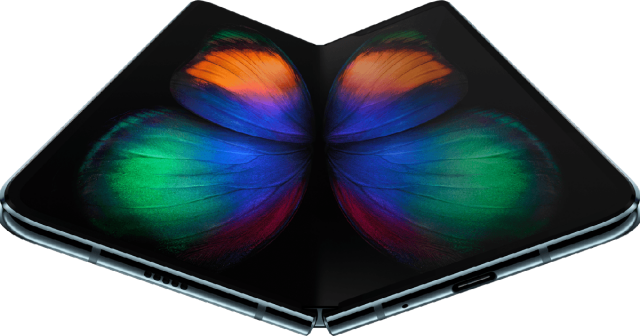 In a time where technology is becoming more useful and prevalent in everyday life, it is typical to see teenagers with the newest cell phones. From the two most commonly sought after phone brands, Apple and Samsung, they are constantly releasing models that compete with each other because of cutting edge features and designs. Most people in search of a new phone are looking to have a device that has a lot of storage space, is waterproof, has excellent camera quality and doesn’t crack easily. For others who purchase the latest models, elements of sleek design and visual aesthetics are what pleases them in addition to the exemplary features.

From flip phones to slide phones to the current Galaxy models, Samsung has had a variety of cell phone options that have kept up with the changing times. To add onto the growing technological spectrum, the Samsung Galaxy Fold will be released April 26th. This device with an innovative concept and convenient usage is a cellphone and tablet all in one. Unique features also include 3 app multitasking, 6 cameras which are beneficial for those who need multiple apps at the same time and who want to improve their photography skills. A device never before seen like this is very exciting for tech gurus and is taking the mobile market by storm. The revolutionary aspect of a folding device essentially seems like a more advanced model of a flip phone but, has two high-quality displays that when unfolded work seamlessly together. Sophomore Arjun Sahansra says, “I think this is where mobile tech is headed for the future. With the Galaxy Fold now being released to the public, this is the mark of a new ‘era’ of phone, which has held true for Samsung in the past with stuff like the Note line and Edge screens. Its high price tag makes it unattainable for many but it as the tech develops in the next few years, you might be seeing more companies making these devices and more people have them in their pockets.”

Although it retails for $1,980, the Samsung Galaxy Fold is a device that is well suited for a futuristic experience. Like Samsung says, “We didn’t just change the shape of the phone. We changed the shape of tomorrow.”