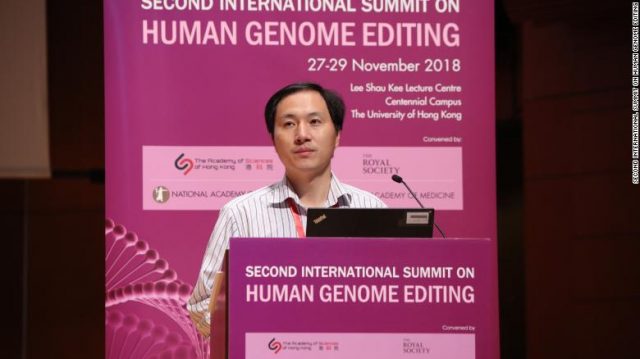 Recently, a Chinese scientist named He Jiankui reported that he has created the world’s first babies genetically edited with CRISPR, a tool that allows researchers to attempt to control which genes get expressed in plants, animals, and even humans; to delete undesirable traits and, potentially, add desirable traits; and to do all this more quickly, and with more precision, than ever before. Although his experiment has not been fully vetted, many scientists are concerned about the implications of He’s experiment.

He, a Stanford trained associate professor at the Southern University of  Science and Technology in Shenzhen, China, says that he is proud of his work, as his intention was to prevent a set of twin girls from being infected with HIV. If his research is confirmed, he will he the first person to use gene editing technology to edit genes in a human embryo that resulted in a live birth, opening a new chapter for gene editing.

After his experiment was reported in September, he went missing in early December. Recently, He is reportedly living in a state-owned apartment in Shenzhen, China, surrounded by armed guards. He is facing the possibility of the death penalty on corruption and bribery charges in addition to violating state guidelines, which carry the same legal weight as laws in China.

Although this technology may be able to cure genetic diseases, using CRISPR to edit the genes of a viable fetus is unethical and can have dire consequences. For example, the gene He removed is called CCR5. Removing this gene would make a person immune to HIV, but it would also dramatically increase their risk for West Nile virus. And not only would they be more susceptible to West Nile virus, but they might pass this trait on to their children. Because the repercussions of creating “designer babies” are unknown, this research should not e allowed to be done on humans until the risks of using this technology are completely understood.