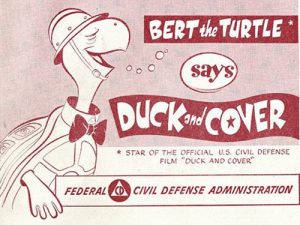 1962. When I asked my grandfather about this year, one word stood out in his mind: panic. He was a mere twenty years old, in the proverbial prime of his life, and an omnipresent sense of panic is what he most recalls. Throughout my life, I can recall hearing him tell stories of windows covered with black sheets, of drills that were carried out in anticipation of the all-too-feared atom bomb attack, and of students in classrooms across America watching the Duck and Cover video–giving them futile hope that, if a bomb did drop, they would know what to do.

It’s all to say that, in the past century, America’s relations with Cuba have been less than amicable. The Communist regime famed by Fidel Castro and perpetuated by those who came after him, fundamentally goes against all that America stands for. For this reason, an embargo was passed against Cuba, painting the country, in the eyes of Americans, as an enemy. However, President Obama, in accordance with the ultra-progressive governing style that he is known for, has set out to change that.

On March 22, at 4:15 p.m., Barack Obama became the first president since the embargo to venture onto Cuba’s shores. This has been met with an onslaught of criticism from the Right, which is presenting the argument that it is essentially un-American to mend a connection with a nation that follows Communism. On the other hand, many believe that it is time to put grievances of the past aside, and to repair relations with one of our closest neighbors.

With all of that being said, in the wake of Tuesday’s horrific attacks carried out by ISIS in Brussels, many are calling upon Obama to cut his trip short. As the rest of the world is currently operating under high alert, it is important that the president of the Free World is protecting its citizens. The times are changing. Our world isn’t as safe as we had once thought it to be, and now might not be the best time to take risks. The biggest fear, in all of our minds, is not about what is currently happening, but what might be coming next.