Home Opinion Bullies or Bystanders: Is Bullying a Prevalent Issue in Hills West? 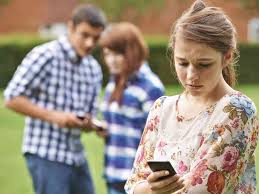 In our current society, we often cannot go one day without hearing of another bullying-related tragedy on the local news. We often hear that our peers are more susceptible than ever to bullying, due to the urge to “fit in”; However, while traditional bullying still remains, a new form of bullying has been on the rise, and has  claimed more lives than the traditional practice of simply shoving someone against a locker. Cyber bullying, as we all are aware, is an online form of harassment that has become frequent due to the abundance of social media platforms constantly available to us. Victims of cyber bullying often cannot avoid the attacker. But is bullying prevalent in Hills West? Are we truly the exception to a generation of online harassment?

I first asked myself, “how do students feel about bullying,” and “is it an issue the community should be concerned about?” After asking many students, most agreed that bullying is not a paramount issue in High School West. Alicia Anthony, a student here at High School West, had this to say on the issue: “Bullying is terrible and really common in high schools around the country. But, to be honest, bullying is not a prevalent issue in our school. And while bullying isn’t okay, in my opinion, people who are cyber bullied have the opportunity to log off and avoid the bullies.”

The Peer Ambassador program is one of the many actions taken by the school to attempt to curb any bullying that may occur amongst students. Christina Chung, a Peer Ambassador herself, states, “I find bullying to be a major issue in today’s society. It isn’t very physical [anymore] and it’s more on the internet, and a lot of cyber bullying [is] going on, which may lead to suicide. There aren’t as many cases of bullying at High School West, [although] no one can know, because nowadays everyone talks behind a screen. I personally feel that Half Hollow Hills is very accepting and [has] a no bullying policy [that is] well-handled.”

Cheyanne Waugh seemed to think that it is in fact a problem at our school and said, “I believe bullying is a problem in our school and people like to push it off like its nothing. I think it is something that’s hidden underneath, but if you pulled off the layers you will find it inside. People don’t want to come out in fear of looking like a ‘wuss,’ but [I know] there are a lot of people affected by it, because I see it everyday. If I see it I will say something, because I refuse to be a bystander.”

Although many students seem to have an optimistic view concerning our school and bullying, it does not mean that is does not occur. Simply calling someone a name, although it may seem harmless, can have a lasting effect on some students. It seems as if bullying does not occur as frequently in High School West as in other schools, but students are still concerned with the issue of cyber bullying and the danger the anonymity of social media allows.

Although bullies can cause a great deal of damage, the people who most likely cause more harm to the victim are bystanders. If you see bullying occurring, speak up or tell an adult. You have a voice, so use it to make a difference. As one Hills West student put it, ” If you see that someone is clearly getting bullied, what makes you any better than the bully if you’re not saying anything and speaking up for that person?”