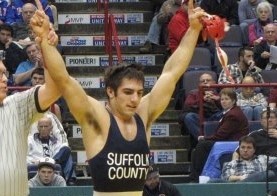 A sea of red “BELIEVE” shirts jumped and cheered as Hills West senior Tyler Grimaldi kneeled on the mat in the Albany Times Union Center as time expired in the finals of the NYS wrestling championship 160 lb division. For 5 years now, Tyler has had one dream, to be a state champion, and right then and there it came a reality. Anyone who knows Tyler will tell you how hard he works and how much he really wanted this.

In the finals, Tyler dominated in a 9-3 victory over Steve Schneider of Macarthur High School. Grimaldi is Hills West’s first ever wrestling state champion. Coached by Mike Patrovich and Mike Lupa, Tyler not only took home the state title, but also took home the sportsmanship award for Section 11. To reach the finals, Tyler had to defeat three other opponents. In the first match, he came away with a pin over Colin Ryan of Carthage HS in 3:52. In the quarterfinals, Tyler took on Jake Weber of Clarence HS and won with a 7-2 decision. The semifinals, which were on Saturday morning, saw Tyler matched up against Dale White of John Jay East Fishkill HS. White was battling injuries all season and forfeited in the second period after experiencing pain in his back. The finals were set for 6 PM that night, and it was against a common foe for Tyler in Steve Schneider from Macarthur. This was the third meeting between the two this season. Among wrestlers it is often said that the hardest thing to do in wrestling is to beat an opponent three times in one season, but Tyler proved this wrong after a dominating third win against Schneider. Schneider’s only three points were escapes when Tyler let him up. Also qualifying for states from West were seniors Joe Piccolo and Jagger Rebozo.

This fall Tyler will be taking his wrestling talents to Boston, where he will be wrestling for Harvard.