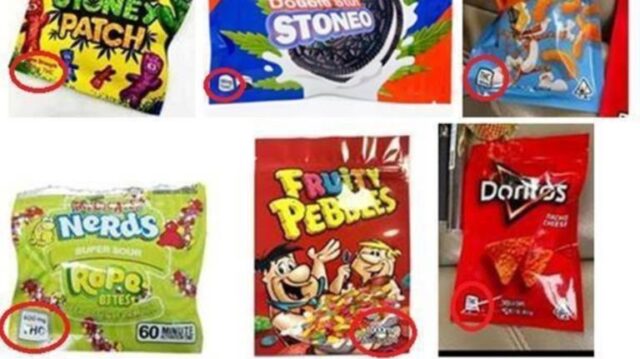 New York Attorney General Letitia James has alerted an alarming new trend of THC-containing products packaged to look like candy and other snacks.

The bags look very similar to their non-laced counterparts, featuring company logos and iconic mascots. Although some have cannabis-based names, such as “Double-Stuffed Stoneos” and “Stoney Patch Kids,” others have almost no distinction from their weed-free counterparts, besides two small warning labels at the bottom that could be easily missed.

James said the snacks are most often sold on the internet,  where sales of marijuana are currently illegal and unregulated.

“These unregulated and deceptive cannabis products will only confuse and harm New Yorkers, which is why they have no place in our state,” James said. “It is essential that we limit their access to protect our communities and, more specifically, our children. In light of an increase in accidental overdoses among children nationwide, it is more vital than ever that we do everything we can to curb this crisis and prevent any further harm, or even worse, death.”

Last year, 70% of all calls to the poison control center regarded children under age five.

Another issue regarding these items is the amount of THC they contain. For example, a small 8.5 oz bag of THC-laced Cheetos has a whopping 600 milligrams of THC, 120 times more than the maximum legal serving size for adults in New York. Oblivious consumers of products could consume 120 times more THC than legally allowed when trying to enjoy a bag of Cheetos because, let’s be honest; most people are finishing an entire small bag of Cheetos in one sitting.

Even though it sounds like a significant concern, it may just be another classic example of marijuana-based fear-mongering. Do we need to be concerned about it? Joel Best, a professor of sociology and criminal justice at the University of Delaware who has been studying this topic, says no. Best defines “the practice of giving contaminated treats to children during trick-or-treating” as Halloween sadism. He conducted a study investigating the growth of concerns over drug-laced candy and the actual distribution occurrences. According to the study, as of 2011, parents of children 12 and below discovered that 24% were concerned, and the numbers have only increased over time. Best has shot down claims, saying, “I’ve done my homework, and I can’t find any evidence that any youngster has been killed or gravely injured as a result of sweets obtained while trick-or-treating. This, in my opinion, is exaggerated.”

Despite the evidence that there is a low probability of distribution of THC-laced Halloween candy, parents are still highly concerned, especially with the uptick in the number of states that have made marijuana legal. As per The New York Times, this myth might have begun in 1959, when a California dentist put laxative pills coated in candy into trick-or-treaters’ bags, causing 30 of them to become sick. Concerns died down but rose again in 1982 when grocery store reports showed “candy sales dropping from 20 to 50 percent.” Best told The Times that he “can’t find any evidence of any child being killed or seriously hurt by a contaminated treat picked up in the course of trick-or-treating.”

Mrs. Gershowitz is a librarian here at Hills West. Her kids are now 34, 31, and 29, but she says that when her children went trick-or-treating when they were younger, she would throw out anything that was “unwrapped” and “anything questionable.” She believes that “it’s probably a small proportion of what is out there” but warns everybody to “be careful.” Hills West students say that they have heard of THC-laced candy but have not encountered it.

Overall, the signs point in the direction of little concern about THC candy, but Hills West students must make sure they are aware of what exactly it is that they are eating. Happy Halloween, Hills West!