Home School News Parents Petition to Change the Name of ‘Whiteboards’, Claiming the Term is... 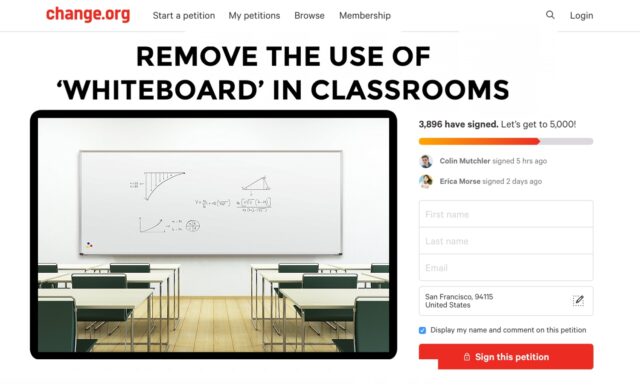 In the turn to a more progressive future, parents of Half Hollow Hills students have started a Change.org petition in an effort to disband the use of the term ‘whiteboard’ on school premises.

The petition, written up by a diverse group of parents, states, “In recent years, Half Hollow Hills’ abundant budget has allowed for an expansive, modern renewal of school grounds. However, with the introduction of ‘whiteboards’, students and staff may be inclined to use racially motivated language in the classroom. The ultimate goal of our petition is to promote ‘color blindness’.”

Historically, this petition is not an isolated incident. In the past, petitions were started within the art department to strip the markers and colored pencils of their color names in order to create, as the parents claim, “a move towards color blindness”.

“I’m afraid to ask my fellow students to pass me the brown marker. I’ve heard talk within the art community here at West that parents want to change the name of the ‘dark room’ used to develop photographs,” revealed an AP Art student.

The petition racked up 3,000 signatures from all across the district with inflamed comments piling up in support of the movement.

While most of these motions towards ‘colorblindness’ have gone unnoticed by the District, the movement has had one successful appeal. In 2019, when ideas for a club centered on upholding eco-friendly ideologies and doing their part in saving the environment began floating around, the initial club name was the ‘Green Club’.

However, with an internal push from parents whose students were involved in the club, the ‘Green Club’ was quickly retitled to the ‘Environmental Club’.

The issue at hand brings to light the complexities of linguistics on the student body and perception of the world. Now, we wait and see to see how the District will respond to the latest petitions created by the colorblindness movement.