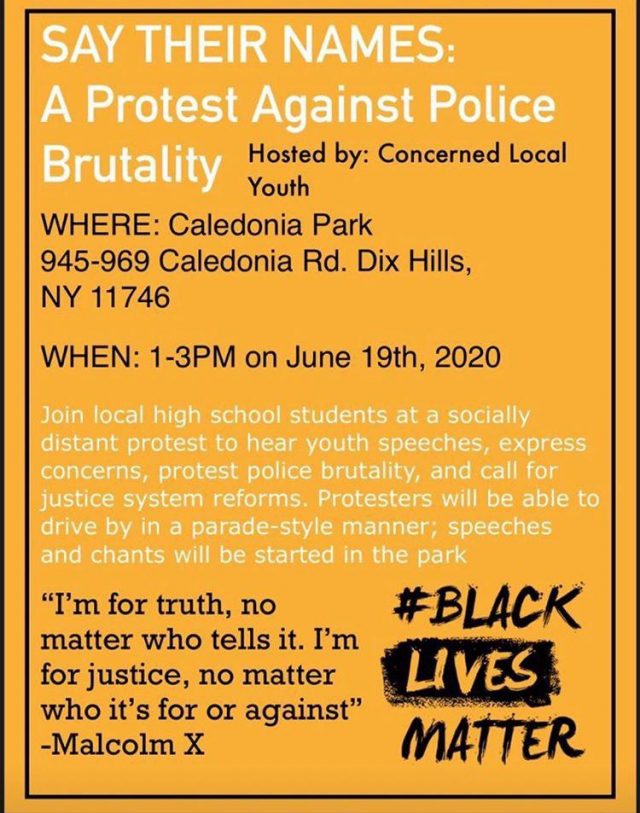 Although the United States was still in the midst of a pandemic over the summer, several events have sparked conversations about civil rights and instilled overwhelming confidence in today’s youth. This change caused by the death of George Floyd in late May and unfortunately others earlier this year inspired many people to use their right to protest against police brutality and social injustice plaguing this nation. Whether it be through sharing Instagram posts raising the voices of minority groups, signing petitions to give justice to those unjustly killed, or going to in-person protests, respecting social distancing guidelines, of course. This summer became memorable for those who became activists in their community.

Something as easy as starting an Instagram account can be a form of activism. Toward the beginning of this summer, an account called @bipocathhh was created in order to discuss the role of race and racism throughout the school district. The account is run by 3 alumni from Hills East and its creation was prompted by the mass protests throughout the country early this summer. With this account, the students intend to “amplify the voices of BIPOC (Black, Indigenous and People of Color) students and alumni and give them a platform where they can share their experiences anonymously”. Many of the posts featured on the account, unfortunately, are negative encounters within the district. However, the purpose of these stories is to create a place of healing for those who have experienced discrimination in school. According to the owners of this account, “we created this [account] as an attempt to create a shared space where allies can reflect and heal together” and through giving the perspectives of racial incidences, it can lead to “unwavering dedication toward justice”. Through their actions, in August a petition was signed by students across the district which made administration agree to implement racial justice into the curriculum to emphasize the importance of diversity in education.

There have also been student-led protests from members of the Concerned Youth of HHH club supporting the Black Lives Matter movement. One of the key organizers was senior Grace Woodard and wanted to take action because she and other students had strong opinions on bringing awareness to racial issues throughout their experiences in school. During the protests, these students led chants and expressed their thoughts on this movement and police brutality to their peers. Being that this was a local event many students from Hills West attended them and inspired others by sharing their views on supporting such a universal movement. Woodard’s biggest takeaway from playing such a major role in this event is that “we have the power to exercise our voices. We aren’t as useless as the school and the rest of the nation seems to think”. Another student who took part in this was Simran Chaudhry who is also a senior this year. She felt extremely empowered by the idea of making this happen and was “so inspired by the stories [her] fellow black powerful women and men who shared them” which made her want to continue fighting for this cause. Chaudhry also believes that because of hearing that all of these protests going on across the country she went out of her way to educate herself on these issues by reading and watching the news. She says as a result of learning about the movement, “I wanted to use my power and my voice to help elevate their [the black community’s] cause and share it with others”.

Even though it was difficult to leave the house this summer, making the effort to get out and advocate for a cause is an effective way to make a memorable summer.