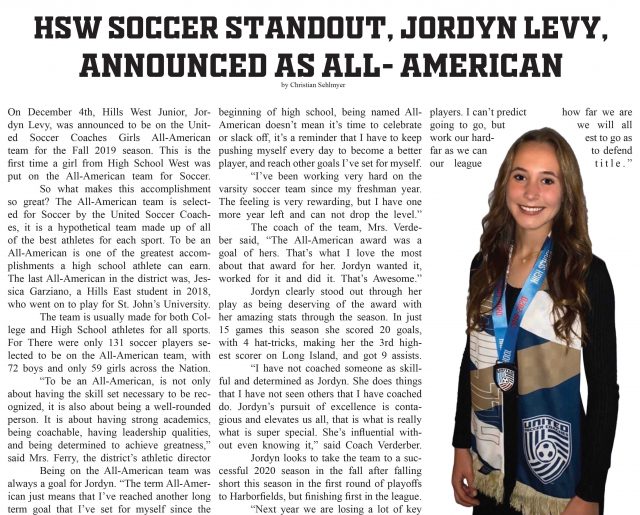 So what makes this accomplishment so great? The All-American team is selected for Soccer by the United Soccer Coaches, it is a hypothetical team made up of all of the best athletes for each sport. To be an All-American is one of the greatest accomplishments a high school athlete can earn. The last All-American in the district was, Jessica Garziano, a Hills East student in 2018, who went on to play for St. John’s University.

The team is usually made for both College and High School athletes for all sports. For There were only 131 soccer players selected to be on the All-American team, with 72 boys and only 59 girls across the Nation.

“To be an All-American, is not only about having the skill set necessary to be recognized, it is also about being a well-rounded person. It is about having strong academics, being coachable, having leadership qualities, and being determined to achieve greatness,” said Mrs. Ferry, the district’s athletic director

“I’ve been working very hard on the  varsity soccer team since my freshman year. The feeling is very rewarding, but I have one more year left and can not drop the level.”

The coach of the team, Mrs. Verdeber said, “The All-American award was a goal of hers. That’s what I love the most about that award for her. Jordyn wanted it, worked for it and did it. That’s Awesome.”

Jordyn clearly stood out through her play as being deserving of the award with her amazing stats through the season. In just 15 games this season she scored 20 goals, with 4 hat-tricks, making her the 3rd highest scorer on Long Island, and got 9 assists.

“I have not coached someone as skillful and determined as Jordyn. She does things that I have not seen others that I have coached do. Jordyn’s pursuit of excellence is contagious and elevates us all, that is what is really what is super special. She’s influential without even knowing it,” said Coach Verderber.

Jordyn looks to take the team to a successful 2020 season in the fall after falling short this season in the first round of playoffs to Harborfields, but finishing first in the league.

“Next year we are losing a lot of key players. I can’t predict how far we are going to go, but we will all work our hardest to go as far as we can to defend our league title.”