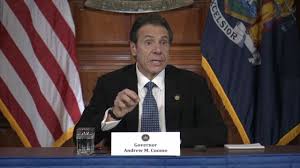 Thursday afternoon New York governor Cuomo announced New York’s coronavirus shutdown from April 29 to May 15. This announcement was made in coordination with other states in the northeast that have agreed to form a coalition. The other states in this coalition include New Jersey, Connecticut, Pennsylvania, Delaware, Rhode Island, and Massachusetts. Because these states economies are so intertwined, the governors of each state have agreed that a coordinated response is the best way to prevent a second wave of the virus.

Governor Cuomo cited some promising statistics during his press briefing like the lowest daily death rate in ten days and a decrease in the three-day average number of hospitalizations. However, he said the rate of infection would still need to decrease significantly before he would lift the restrictions. He went on to say “What happens after then? I don’t know. We will see depending on what the data shows.”

This extension of the shutdown came the day after Governor Cuomo required New Yorkers to wear face coverings when they are out in public and cannot maintain proper social distancing from others. You must also wear one when using public transportation and for hire vehicles, like Uber or Lyft rides. Additionally, they must also be worn by children two or older.

Although Progress is being made in the fight against COVID-19, it still seems there is a long way to go before our lives can return to “normal”.