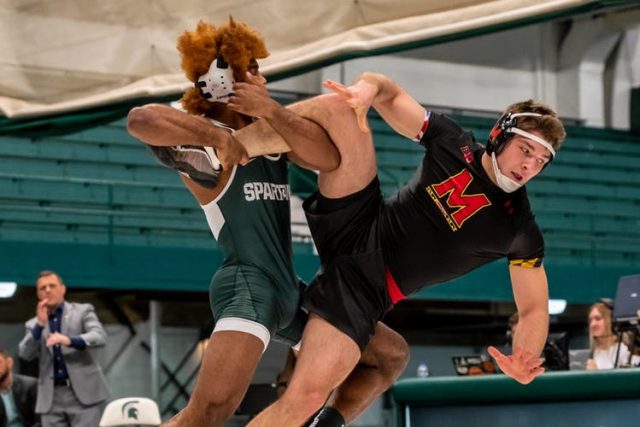 As Maryland freshman Parker Robinson walked off the mat at the Xfinity center after suffering a major decision to Rider’s Ryan Cloud, it marked an unremarkable end to an unremarkable season by the Terps. Although Maryland wrestling wasn’t breaking any records this season, they were making history in a different way; they were the first division one college wrestling team to wear shirts and shorts as their official uniform for an entire season, as opposed to the traditional singlet.

When you ask most people to picture wrestling, chances are most people will think of singlets. Singlets are one of the most iconic pieces of American wrestling culture. Singlets were popularized in the 1960s. Before that, most wrestlers wore trunks and no shirt. The singlet was well-received because it protected wrestlers from skin infections and mat burn, but it did not interfere with the wrestling because it was tight enough to the body so that it could not be grabbed during a match.

As interest in wrestling declined more rapidly in recent years, the wrestling community looked for reasons kids weren’t wrestling as much as they used to. It was speculated that a big reason for this was the singlet.

For many wrestlers (youth wrestlers especially), the singlet can be uncomfortable, it is tight and short, and can cause many wrestlers to feel self-conscious while wearing them, because of the way their body may look in the singlet. As participation in wrestling appears to be declining, many schools decided they had to do something to draw more participants in; their answer was a two-piece shirt and shorts uniform.

The shirt is usually tight-fitting but still not as tight as a singlet, but the shorts are very similar to fight shorts used by MMA fighters and boxers, which are very loose. One of the major drawbacks of this uniform is that it is easier to grab onto than a traditional singlet. If a wrestler grabs onto their opponent’s shorts in a match, even if it is accidental, the wrestler wearing shorts is automatically awarded a point.

However, in the past five years, many high schools have switched to this uniform completely or had this as an additional option for wrestlers who preferred not to wear singlets.

The two-piece rose to prominence in the FloWrestling “Who’s Number One” tournament. Every year, wrestling media group FloWrestling takes the top 4 High School wrestlers at every weight class and puts them up against each other to see who America’s best high school wrestlers are. This event was the first significant wrestling event to require the competitors to wear a two-piece uniform.

However, many questioned the decision because the competitors were experienced wrestlers who were comfortable in singlets. Despite this, “Who’s Number One” is a massive success that garners the attention of wrestling fans across the country and produces some of the most exciting high school wrestling matches each year.

This also caused a jump in the adoption of the two-piece uniform, with many coaches feeling more comfortable now that a respected wrestling organization has used them for high-profile events.

Although it has its drawbacks, two-piece uniforms may be what wrestling needs to draw in more participation in the sport.