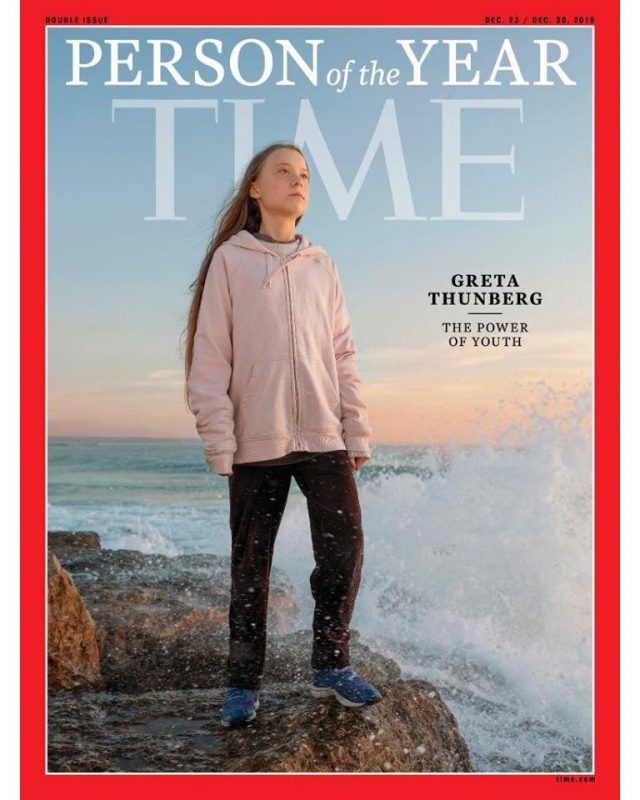 Greta Thunberg was recently chosen as the 2019 Time Person of the Year.  This annual recognition is presented to someone who “for better or for worse… has done the most to influence the events of the year.”  This award started out as Man or Woman of the Year, but it changed to Person of the Year in 1999. The first Man of the Year was Charles Lindbergh, who flew solo nonstop across the Atlantic Ocean.  Dozens of others were nominated this year including world leaders President Donald Trump and President Xi Jinping, the Hong Kong protestors, and entertainment stars such as Keanu Reeves and Taylor Swift.

Greta Thunberg is a 16-year-old Swedish climate change activist who is known for her straightforward speeches to the public and to political leaders.  She points out that climate change has led to an existential crisis for all of humanity, adults are responsible, young people are severely affected, and not enough is being done. Greta Thunberg had first heard of climate change when she was 8 years old.  Because she did not understand why nobody was trying to fix the climate issue, she became depressed and lethargic and stopped eating and talking and was diagnosed with Asperger’s Syndrome, OCD, and selective mutism. Then for two years, she encouraged her parents to go vegan, start upcycling, and give up flying.  She told them that if they increased their carbon footprint, they were taking away from her future. Her parents caved in, despite the fact that when her mother gave up flying, she also gave up her international career as an opera singer.

Her two largest impacts of 2019 were the school strike for climate and her voyage to North America.  When Greta Thunberg heard about the teen activists from March for Our Lives who led strikes for gun control, she was inspired to start climate strikes.  She started during Sweden’s hottest summer in 262 years by missing 9th grade until the 2018 Swedish general election. She wanted the Swedish government to reduce carbon emissions, so for three weeks, she sat outside the Riksdag every day with a sign that said “School strike for the climate.”  Photos of her went viral on social media and she gained international attention. Then, in August 2019, for 15 days, she sailed from England to the United States. Greta Thunberg attended the UN Climate Action Summit, participated in climate protests in multiple major cities, and hosted a press conference with the United Nations Children’s Fund to call out countries that did not meet their emission reduction goals.  Later, in November, she sailed back to Europe for the 2019 United Nations Climate Change Conference.

Despite her hard work, not everyone was pleased with the results.  Donald Trump tweeted “Greta must work on her Anger Management problem, then go to a good old fashioned movie with a friend! Chill Greta, Chill!”  Greta responded by mocking the president through changing her Twitter bio to “A teenager working on her anger management problem. Currently chilling and watching a good old fashioned movie with a friend.”  However, this is not the first time that Trump has come after Greta. Following her United Nations General Assembly Speech, he tweeted sarcastically “She seems like a very happy young girl looking forward to a bright and wonderful future.”