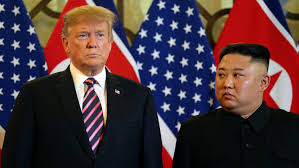 It is a fact that North Korea has ambitions to be a nation with nuclear weapons and that its economy and people are suffering. North Korea is now willing to put their nuclear ambitions aside to help its economy. On February 27, 2019, President Trump and Chairman Kim and their advisors discussed the denuclearization of North Korea in exchange for the lifting of US sanctions. Progress was made, the idea of a US liaison office in North Korea was considered, and then negotiations began

After negotiations on the second day, President Trump abruptly ended the summit because of mutual disagreement of what was being given up. President Trump said “ Basically, they (North Korea) wanted the sanctions lifted in their entirety, and we couldn’t do that.  They were willing to denuke a large portion of the areas that we wanted, but we couldn’t give up all of the sanctions for that.” However, the North Korean Minister of Foreign Affairs says that North Korea asked for 5 out of 11 sanctions to be lifted in exchange for the denuclearization of North Korea’s primary facility. Regardless, President Trump left the summit early due to disagreement during negotiation.

President Trump’s withdrawal from the meeting has been viewed as both a success and a failure.

The summit and President Trump’s withdrawal was compared to that of President Reagan with General Secretary Gorbachev during the Reykjavik negotiations regarding nuclear technology. Secretary Gorbachev and President Reagan agreed on almost everything, except for the limitations put on US programs that would militarize space. The summit ended early, but there were several meetings between the US and Soviet leaders afterward, showing that one bad summit does not stop diplomatic progress.

It has also been called a failure because so little was done and North Korea still has access to nuclear weapons. President Trump then receives backlash for believing that Chairman Kim had no idea of the torture of US student Otto Warmbier to death.

The US has also decided to further scale back on joint military drills with South Korea for both diplomatic reasons. Historically, these annual exercises raised tensions with North Korea and have been scaled down in June 2018.

Overall, the US and North Korea have made diplomatic progress, as the Hermit Kingdom has finally opened up to the US. In 2017, North Korea had little to no diplomatic relations with the US, but it has changed after the Singapore Summit in June 2018. The Hanoi Summit can be seen as progress or a step back in the denuclearization progress, but only time can tell if this summit was a success or failure.