The 2016-2017 Hills West Girls basketball team, led by Coach Dugan, is coming off a very impressive 18-5 record along with going 9-4 in league play. While basketball is a team sport, there is one story that clearly headlines the team this seson and her name is: Sam Hinke. She has reached a milestone that few achieve during a high school career:  the 1,000th point. 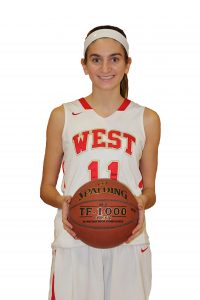 The old adage in sports is to always look ahead to your next opponent, but it is also important to reflect on your accomplishments. When asked what is going to run through her mind when she is honored before the game starts she responded with, “When I think about hitting 1,000 points I still can’t believe it. I worked so hard all four years on varsity and it finally paid off. It took a lot of practice and learning. I learned a lot about myself as a player and the things I can achieve if I put my mind to them. I’m so happy I was able to achieve this goal, but I couldn’t have done it without the help of my teammates and coaches.”

Hinke’s talent was established early by being a member of the varsity team as a freshman. Constantly building on her previous seasons, by her junior year she was averaging just under fifteen points a game. The opportunity for a leader to step up was this year with the departure of many seniors. Thrusted into that role Hinke has only embraced it, “I love being the leader of my team. My role has become much more important than it ever has been in my previous seasons. I try to lead by example because I know that all the younger players are looking up to me. I still am improving my game every day in practice and working on achieving both personal and team goals. Everyday I feel like I’m improving and picking up different moves I never knew I was capable of. It puts a lot of pressure on me every game, but I’m the type of player that wants the ball in her hands at the end of a close game.”

This season for the Lady Colts has definitely been a more challenging one, as a tough five game stretch had them lose four of those games, dropping their record to 9-9. However, rather than sulk they have chosen an attitude of resilience. Hinke commented on this saying, “Our team has a great ability to work together and get every player involved. Everyone has their own strengths they apply to our type of play. No one plays selfish and we all leave everything out on the court after every game. We are all very close off the court. We have pasta parties and go out to eat a lot. You could definitely tell that we have a great team chemistry. We are one win away from playoffs and we couldn’t be more excited to get that last win. Making the playoffs would be a great accomplishment for us. One of our strengths is never giving up. We fight hard till the end of every game.”

The importance of the head coach cannot be overemphasized, especially the motivation he provides for his players. Building and sustaining relationships is why coaches do what they do. Hinke’s head coach story is one that goes way back, “He happened to be my elementary gym teacher since I was in 1st grade. When I found out he was coming my sophomore season to coach, I was very excited. He taught me a lot about what it takes to be a good basketball player and athlete in general. Since I’ve known him for so long he knows what I’m capable of and pushes me to my greatest potential. He’s taught me almost everything I know about basketball and what it takes to be successful. He expanded my style of play, which made me a more versatile player. He’s tough on me, but I don’t mind because that means he sees something in me and knows I’m not reaching my highest potential. I give him a lot of credit because he shaped me into the basketball player I am today.”

Legacy is a crucial aspect for any athlete at any level of sport. Players want to leave the program in a better shape than they found it. This is something that Hinke has thought about and has kept in mind especially as this is her senior year, “With this being my last season, I want everyone to now that I left everything I had out on the court. I pushed myself everyday and worked hard to improve my own play and my teammates as well. I’m making the best decisions and working to reach my greatest potential before I leave. I plan on making it as far as I can into the playoffs as the leader of my team. I want my teammates and coaches to know that every game I play in I work my hardest and do it not only for myself but for them too.”

It’s clear to everyone who attends games what Sam Hinke means to this year’s playoff hopes, and to have the opportunity to clinch a postseason spot in front of the home fans is what Sam plays for. Come out and support the team today at 4 p.m in the West gym. If you cannot attend the game, then be sure to checkout the live stream on YouTube.