Last week the Colts put a bow on another successful regular season (6-2) with a 49-0 lashing over the Deer Park Falcons.  Next up for coach Madden and the team is a 1st round playoff match-up against the Newfield Wolverines (4-4). Earlier this season the Colts defeated the Wolverines 49-33 on Homecoming weekend. In my weekly sit down with coach Madden is asked him if he thought the defenses would play better in this matchup and he said ” I think we’ve gotten better on both sides of the ball since we played them”.   He also pointed out that most of the points Newfield scored were against his  teams “second unit ” and that this week that unit is going to need to “step up”  because it is a “team effort”. In last weeks game vs Deer Park the defense dominated and earned the shutout. I asked coach Madden what specifically  he liked about their performance and he said ” the discipline of the defense was outstanding” against Deer Park’s triple option offense.  On the other side of the ball the offense continued its excellent play led by a potent and consistent rushing attack.  Sophomore running back  Devon Wright , who has rushed for  1170 yards on 142 carries ( 8.2 YPC) and 14 touchdowns continued to pace the offense with another outstanding performance. This week the offense faces a Newfield defense that has 3 players with at least 2 or more sacks this season. I asked coach Madden  what his gameplay is  for neutralizing their pass rush and he said ” we have to get rid of the ball faster” and “use the running game to set up the pass”.  Although Devon Wright is primarily a running back he may get a chance to start at quarterback this weekend. I asked coach Madden if a QB change was a possibility and he said ” There is no one starting quarterback and we have three guys who can play and do a lot of great things to help the team and thats how we roll”. The other two possible quarterbacks are Gerald Filardi and Alexander Filacouris. He did not say who will start the game, but all three quarterbacks have started games this season and it would not be surprising to see all three get some opportunities this Saturday. There are no significant  injuries to report for the Colts and they will roll a healthy squad into their first playoff matchup against Newfield. Saturdays Playoff game will be played on the Hills West Turf, kickoff will be at 2pm. LETS GO COLTS!!! 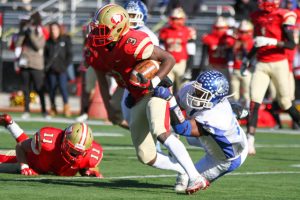