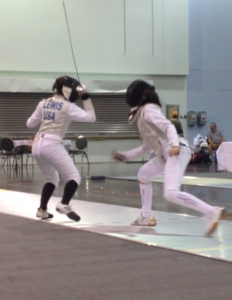 Senior Amanda Lewis is known throughout Hills West for being an exceptional fencer. Lewis began fencing during the summer leading into her freshmen year at LuHi sports camp and took a liking to the unique sport. At the end of her camp session she reached out to Coach Daly, the coach of the Hills Varsity Fencing Team, who helped her train as a foil fencer. When asked what fencing means to her Lewis replied, “Fencing is a big part of my life. I love it because it isn’t just a test of physical ability, it is a mind game as well.”

During her high school season Lewis trains with the team for at least 12 hours a week, with additional individual training of 5 hours a week. Lewis has competed in both regional and national tournaments throughout the country including the Junior Olympics in Texas and Maryland, and the North American Cup in Wisconsin. Amanda has also qualified for the 2014 Junior Olympics in Oregon. Although fencing takes up much of her time, fencing has allowed Amanda to better prioritize everything she needs to do. While she has excelled in this sport so far, she looks to continue fencing in the future. Unfortunately, her high school career will be coming to an end, but college offers a new level of competition. Lewis is looking at various colleges with remarkable fencing programs. It is safe to say we will see this fencing star achieve an even higher level of greatness in the upcoming years.