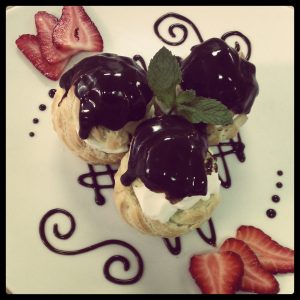 The stress of high school mostly stems from the anxiety of students’ desires to get into top colleges and focus on careers such as business, law, and medicine. However, that’s not for everyone. Some students consolidate their interests into a specific and perhaps slightly unconventional field. Two seniors in particular, Gina Augusta and Andres Rodriguez, are planning to specialize in their future education to become a part of a field they truly love and have a passion for: food.

Gina Augusta will be attending the Institute of Culinary Education to study baking and pastry arts for eight months. Here, she will receive a diploma for her specific field from the institute, which is located in NYC so she will be commuting. The fact that she will not be getting a bachelors degree does not bother her at all, as she feels it’s more important to have the talent and passion for the field; Augusta believes having a bachelor’s is not as essential in this line of work. In addition, certificates are commonly given to students who wish to focus their skills on one particular area.  Augusta says that she has enjoyed baking ever since she was a child when she would help her mom in the kitchen. Wanting to apply her artistic talents to her enjoyment of food, Augusta started to focus on cake decorating as she was growing up. The institute will involve learning a wide range of skills including cake decoration. “I always knew I wanted to go to a pastry school, but when I visited the institution I knew that it would be best fit for me,” commented Augusta.  Augusta hopes to work making cakes for special events and potentially work in a bakery after her time at the institute. She aspires to start her own bakery one day, “I love baking a pastry because it’s something that you can have so much fun doing it while still making it a professional career.” Augusta also loves using edible materials to create works of art on cakes and pastries.

Andres Rodriguez is going to college, Johnson and Wales, and has his eyes set on the food industry as he is majoring in culinary arts.  Rodriguez plans to get into the work environment after graduation by finding a high-class restaurant willing to hire him. “I just plan on being the best and well-known, and after some odd years working in restaurants, I plan on opening my own [restaurant] up, preferably in the city,” he explained. He has always had an interest in cooking, but started to get more involved over the past two years. He says that one of his inspirations is sushi master Jiro Ono, an extremely respected chef with his own famous documentary, “Jiro Dreams of Sushi,” which came out last year. Rodriguez isn’t really sure how his interest sparked, but something that contributed were the cooking shows he watched before he had gained his own skills. Chefs like Rodriguez can receive a number of degrees in their time of studying food, including their bachelor’s, associates, or master’s.

Both of these individuals define the idea of following a personal dream and making what you love a profession. Whether it’s going to an institute to receive a diploma or majoring in culinary arts to receive a degree, Augusta and Rodriguez both have bright futures.