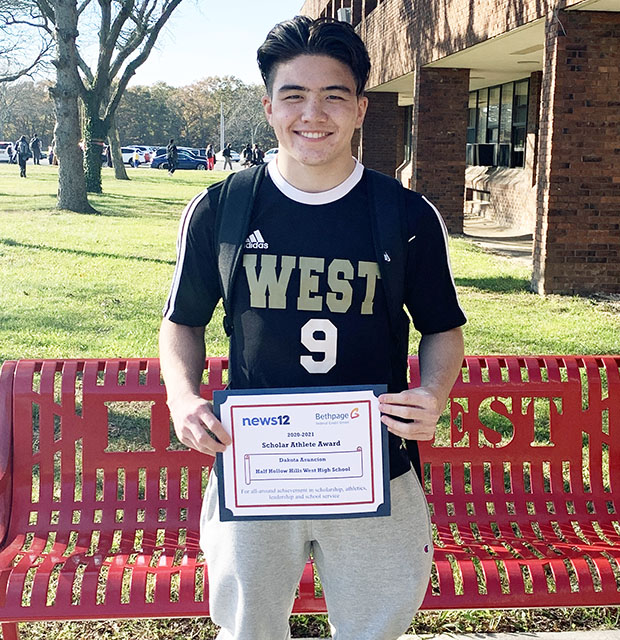 Hills West Senior Dakota Asuncion was chosen for News 12 Long Island’s prestigious Scholar Athlete Award, for his excellence on the soccer field, the wrestling mat, and in the classroom, as well as a legacy of serving the community.

Dakota is the second Hills West Student to win the award in the last year, as Sydney Grant won the award in 2019 for her performance as a captain of the cross country team, sprinting accolades during winter and spring track, as well as high levels of academic achievement.

News 12 awards the Scholar-Athlete Award to senior athletes who have earned significant athletic achievements in their athletic careers, and shown extensive leadership in the sports they play. The athlete must also have a 90+ unweighted GPA, and provide examples of involvement in curricular activities and extracurricular activities, as well as community work and citizenship. Finally, the athlete must be nominated by his or her coach in order to be put in the running for a chance at receiving a Scholar-Athlete Award. Winners of the award also receive a $1000 scholarship courtesy of Bethpage Federal Credit Union, as a reward for their hard work and dedication.

The award requires a lot of hard work and dedication in every facet of life, so winners of this award are some of the most hardworking, talented, and studious students around.

Dakota fits the bill perfectly as he achieved significant athletic achievement in multiple sports, worked hard in the classroom to achieve academic success, and has served his community through various efforts. Dakota is the perfect example of a scholar-athlete, and we’ll be going over how exactly Dakota checked off all the boxes to earn the award

Dakota is both a star soccer player and wrestler, excelling in both sports, and showing immense levels of talent and leadership whenever he steps onto the field or on the mat

Dakota plays center-back and has been a varsity starter for the Colts since his freshman year when he helped lead the Colts to the State Finals. He is an all-conference player and was made captain of the team during his junior year.

Dakota is a hardworking and skilled player, who constantly shows tenacity and seems to have a nearly endless gas tank. “He’s tenacious, he’s our center-back, he never steps off the field, and he’ll literally play every single minute this year,” said Hills Wet Varsity Soccer Coach Doug Gannon

Dakota will be looking to lead the Colts to victory on the field when soccer will be able to play later this year, as its usual fall start was pushed back to the spring due to the Coronavirus Pandemic

Another place where Dakota shines is in the wrestling room. Dakota is a 4-time all-league wrestler, as well as an all-county wrestler his sophomore year. He has been a captain since he was a sophomore and has been leading the Colts wrestling squad and motivating them to be the best wrestlers they can be.

Dakota is quick and agile on the mat, taking opponents down quickly with a single leg and high crotch leg attacks, and then putting them on their back with strong and powerful arm-bars.

Dakota shared the reason he loves wrestling is due to the personal nature of the sport, which makes every win and loss so much more impactful.”On the mat, every success and failure is on you, so there’s no one to blame when you lose, but when you win, it’s all you,” Dakota said

Dakota hopes to continue his dominance on the mat when the wrestling season starts on January 4th.

Dakota doesn’t just put in the work on the field and on the mat, but in the classroom as well. Dakota has achieved immense levels of success there too.

Dakota has a 95 average and is a member of the National Honor Society as well as science and math honor societies.

Dakota checked off the community service and citizenship requirement through his work with Island Harvest Food Bank.

Throughout the summer and fall, Dakota has worked at multiple food drives and distributions to help people financially affected by the COVID-19 pandemic, such as helping to distribute food at the large food drive at Nassau Coliseum in July, as well as multiple smaller food drives.

When asked about how he felt when he found out he won the award Dakota said, “I was very proud and excited when I won the award. I was honored to have been chosen and very grateful for the scholarship money to go towards my college. It was also cool to know that I would be featured on TV.”

I asked Dakota if he had any advice for athletes. Dakota said to make sure they balance their time between academics and athletics, and that they should put maximum effort into both aspects. He also said to make sure athletes are enjoying themselves while they strive for the award

Dakota had big praises for both of his coaches in regards to helping him win the award. “Both of my coaches helped me achieve great success in my sport, which is half the award.” 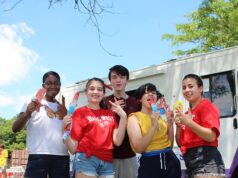 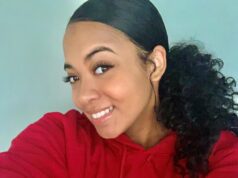 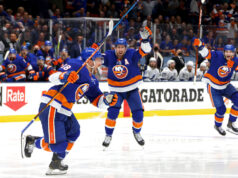