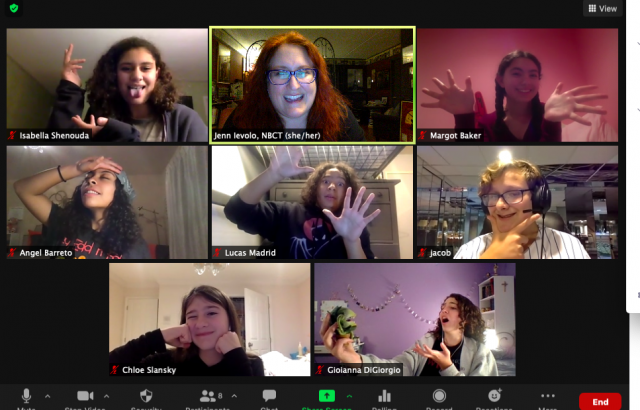 Green screens are steamed, spotlights are flashing on the actors, and waiting rooms are opened for the cast. This is Theatre West during a pandemic. Residing in our houses, the cast and crew of Theatre West performed the play solely over Zoom. As the saying goes, “The show must go on,” and for Theatre West, it did.

Many schools have decided not to put on a school production this fall because of COVID-19 restrictions. But that was not the case for Theatre West. Ms. Ievolo decided that the only safe way to put on a show was over Zoom. At first, it sounded bizarre, how could anyone figure out a way to produce a show this way? Ms. Ievolo and Mr. Riccuiti—Theatre West’s assistant director—held auditions, and roles were cast. There have been online rehearsals by separating into break-out rooms.

It was difficult at first for a new student at our school, Hayaa Beig, an incoming sophomore. She has been living in this district her whole life, but just never attended a public school. “I’d been going to the same all-grade private school my whole life, and the change was really hard. I’m also fully remote, and so it was challenging at first to connect with my teachers and classmates through a screen.” Trying to form a bond was challenging for Hayaa, but she did not let that stop her. She has a very bubbly personality. “Change is always hard, but a lot of the time it can be good. While I missed my old school terribly, I recognized that there was an opportunity for growth, and I couldn’t let it slip away by wallowing in the past.”

When Ms. Ievolo is not teaching AP Art she is putting a play together, over Zoom. Developing a show on a completely virtual stage presented many new problems. Most of the challenges became the job of the Theatre West Director. “The most challenging thing to do when directing a show over Zoom was to find alternatives to traditional movement on stage to keep it visually interesting. By using photo backgrounds and concentrating on actors’ facial expressions we were able to add some more variety, but it was certainly a challenge!” said Ms. Ievolo.

Ms. Ievolo gave each of the cast members a green screen as their background for editing in a picture background. However, many students struggled with the green screens at first. Some may not have had a steamer, others just didn’t know how to put it up. High School West Junior, Jason Quinteros, was a cast member who had a different problem. “The only problem I had was that I had to iron the green screen to get rid of the creases. I didn’t own an iron at the time and I went to Ms. Ievolo for help because, on her Canvas page, she said that she was going to help the people who are having issues ironing the green screen.” Later in the interview, Jason said he wasn’t able to iron out the green screen on time, but with the right lighting, it worked out in the end. Eventually, with some guidance and a lot of tape, the cast was able to figure out the problem.

This fall’s Zoom-centered show will feature a showcase of scenes from Neil Simon an American playwright who passed away in 2018. He wrote over thirty shows and many of them have been turned into movie screenplays. He received more combined Oscar and Tony Award nominations than any other playwright. This is why the show is called A Tribute to Neil Simon, featuring the Odd Couple, Prisoner of 2nd Avenue, Plaza Suite, The Sunshine Boys, Brighton Beach Memoirs, Biloxi Blues, Lost in Yonkers, and Rumors.

Producing Neil Simon shows has not been foreign to Theatre West. Four of his shows that have performed on our stage have been Rumors, Odd Couple, Brighton Beach Memoirs, and Biloxi Blues. Ms. Ievolo reached out to Theatre West alumni to speak about their favorite part of the show they performed in and their experiences. They were willing to send in recordings and they will be placed in between the scenes that will be displayed on the night of the show. In fact, the final editing of the project was done by a Hills West alumnus and Theatre West legend, Johnny DiGiorgio. Johnny worked closely with Ms. Ievolo to create what Theatre West hopes to be a creative first for the club and school.

Many might think that seeing the final product of the show is the best part of the rehearsal process, but for the cast, it would be the actual rehearsal process itself. It’s the fun of putting on a high school production. Theatre West spends roughly three to four months preparing for a show. “I miss the Theatre West family that is established during in-person rehearsals. Our In-person rehearsals create an amazing community and vibe that allows our energies to bounce off of each other,” said Hana Draskin, a junior at High School West and a member of Theatre West since her freshman year. “In response to the pandemic, the zoom rehearsals are the next best thing. I am ecstatic that our annual production is being put on during these crazy times.”

Being a senior and going through a time like this is very hard, especially if this is your last high school show. Every actor looks forward to their last show because it’s their time to make it memorable and to really leave their mark. In their last year, seniors are able to paint a brick backstage in the auditorium. We have two seniors this year, Margot Baker and James Ludemann. Looking back on her years in Theatre West Margot revealed her favorite part about the drama club. “What I miss most is bonding with my Theatre West family. Usually, we spend a few days in the rehearsal process to complete trust exercises and take the opportunity to learn about each other. Tech week is another vehicle for bonding, as this is when the cast comes together and becomes super close.” Although it may not be what we expected, the entire Theatre west family is happy that it is happening.

This evening, December 18, at 7:00 p.m., Theatre West is hosting a Drive-In in the High School West parking lot, near the Natatorium. The tech director, Glen Davis, will be setting up the blow-up screen and working with projection and sound. He has been the tech director for past shows. Sound will be broadcast into car radios, enabling families to experience the first Hills West event this year!

There are some weather precautions that may delay or shut down the production, such as rain or winds more than 15 mph. Less wind means a bigger screen, so Friday’s weather will dictate which screen will be used.

If you would like to come see what our amazing cast, crew, and directors put together, then please look to the announcement currently in everyone’s Canvas account sent by Dr. Catapano. A link found there will direct you to how to reserve a parking space for the show. There will also be snacks and refreshments.

So come on, enjoy your Cracker Jacks and family. Be there or be square!

Reserve your parking spot by clicking the link below!