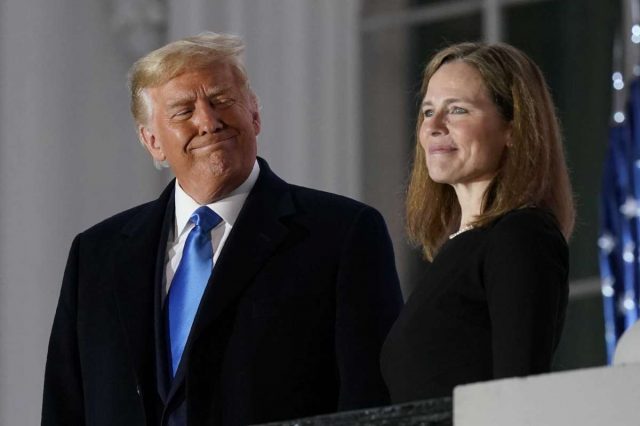 On September 18, 2020, Justice Ruth Bader Ginsburg passed away, leaving open a new seat in the Supreme Court. After much debate and controversy, Amy Coney Barrett was officially sworn in as a Supreme Court Justice on October 27, 2020.

The Democrats wanted to wait until after the election as the Senate did in 2016 after the death of Justice Antonin Scalia. President Obama’s nominee Merrick Garland was struck down by the Republican-majority Senate. At the time Republican Senator Lindsey Graham of South Carolina was quoted saying that vacancies leading up to elections should not be confirmed.

The Republicans argued that it is the president’s duty to nominate a replacement for the Senate to vote. With a Republican-majority Senate, President Trump’s nominee would represent their party better in the Supreme Court, ignoring the precedent previously set.

Regardless of this partisan divide, President Trump made the decision to appoint Judge Amy Coney Barrett, a religious Christian woman with conservative views. After her nomination, the New York City Bar stated that she was “qualified to serve as a Supreme Court justice, with Reservations.” When making this statement, the City Bar determined that she met three out of eight criteria.

There is concern that Barrett’s religious values will interfere with her judgment. She and her family are part of a small Christian religious sect known as “People of Praise.” While women are encouraged to seek high intelligence and rewarding careers, men assume leadership roles. Prior to her nomination, Barrett held the title of “handmaid,” a high-ranking female position.

Serving on the Supreme Court, concerns were also raised that Barrett could interfere with LGBTQIA+ rights. It is unclear where Barrett leans with regard to this issue. Barrett is also openly pro-life, which leads to concerns that she will vote to overturn Roe v. Wade.

Though Barrett’s religion sparks criticism from some, white evangelicals comprise much of her support. Making religious rulings in her past, American Christians are put at ease by her strong familial values. With a husband and seven children, Barrett once spoke out about her family in 2017, saying “Our children are my greatest joy, even though they deprive me of any reasonable amount of sleep.”

During the Presidential and Vice Presidential debates, questions were raised regarding court packing in response to the 6-3 conservative majority. Neither Joe Biden nor Kamala Harris dismissed the possibility of packing the court, adding more justices to balance the divide. Though allowed by the law, this practice is controversial because the Supreme Court has been composed of nine justices since 1869 and is seen as an attempt to gain power. But it is likely that Joe Biden would aim to pack the court as president, pleasing his supporters and angering his opposers.