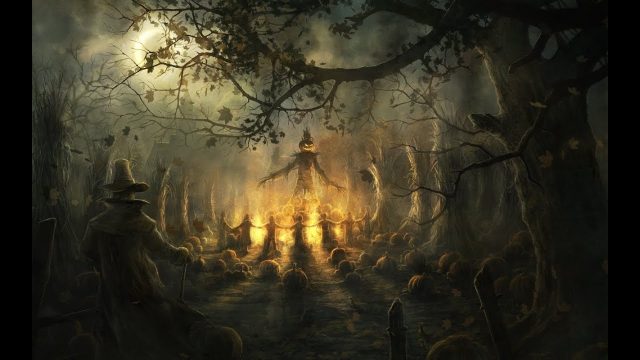 The tradition of Halloween originated with the ancient Celtic festival of Samhain, where people would light bonfires and wear costumes to ward off ghosts. Soon, All Saints Day incorporated some of the traditions of Samhain. Over time, Halloween evolved into a day of activities like trick-or-treating, carving jack-o-lanterns, festive gatherings, wearing costumes and eating treats.

The Celts lived 2,000 years ago in the area that is now known as Ireland, northern France, and the United Kingdom. Their new year was celebrated on November 1, and this day marked the end of summer and the harvest. It was the beginning of a time of year that brought dark, cold winter and was associated with human death. They believed that on the night before the new year, the boundary of the world between the living and the dead were blurred together. The night of October 31, the day we know as Halloween, was believed that the ghosts and spirits of all the dead returned to Earth.

In order to perpetuate this event, the Celts would build large sacred bonfires where everyone would gather around to sacrifice animals and burn crops to the Celtic deities. During this sacred celebration, the Celts would wear costumes that consisted of animal skin and animal heads. When the celebrations were over, they would light their fires again, to help protect them during the upcoming winter.

Halloween didn’t reach America until the 1900’s and the tradition of Halloween costumes wasn’t popular until the 1930’s and trick-or-treating until the 1950’s. However, during the middle of the 19th century, autumn festivities were celebrated annually and were fairly common, but not all of the country celebrated it. Halloween festivities also included mischief-making and the telling of scary stories. In the late 1800’s, America molded Halloween into a holiday more focused on neighborly and community get-togethers, more than pranks and witchcraft.

Trick-or-treating came to be when families could avoid getting tricked by providing candy for the neighborhood and thus, a new tradition came in place. According to studies, Americans spend about a whopping $6 billion annually on Halloween making it the second largest commercial holiday.