Home School News Girls Basketball Gets Off To Another Successful Start 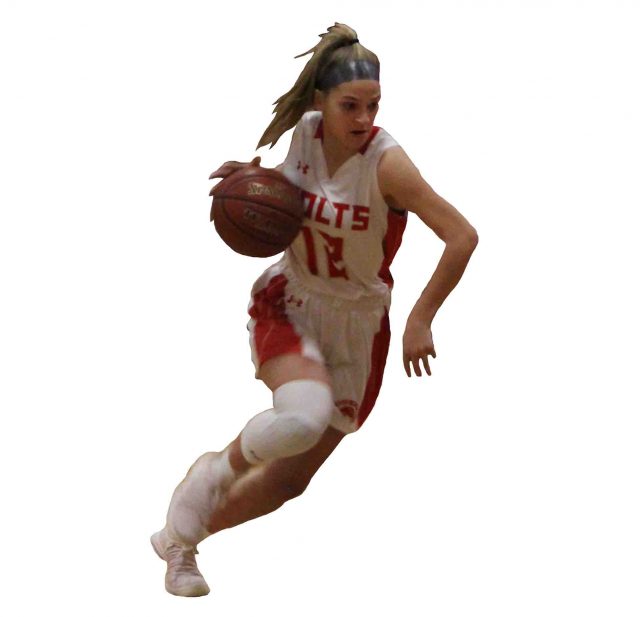 The Girls Basketball team has seen some success as of late, but this season they are gearing up for a potentially deep post-season run. The players are always hungry, the team is always disciplined and the coaching staff is always sharp. All these qualities make Hills West a school were girls’ basketball consistently thrives and is held in high regard by other schools in the county.
Last season, the girls finished the season with an 11-11 record and just made it into the playoffs after squeezing in as the 8th seed, winning several hard-fought and crucial matchups at the end of the season to propel them into playoff contention. The girls would make their first-round matchup highly contested but, much to their dismay, the Colts would be eliminated from the playoff in the first round, ending their season after they had worked so hard to keep it alive. This season they are hoping for a better and less heartbreaking finish; this season they are hoping for a championship.
While the team did lose some key seniors over the offseason, they seemed to have filled the void after bringing several underclassmen into larger roles. Sophomores Reese Johnson and Nia Baker look to step into bigger roles this season as Freshman, Melina Moukas, looks to crack the starting lineup at a young age. The upperclassmen on the roster are going to be taking a bigger responsibility this season as well.
Seniors Charlotte Anton and Emily Ross will serve as leaders on the team in their last season as some of the team’s premier scorers and playmakers. Johnson and Anton are great at going up for rebounds in the paint and dominating the post. Ross and Junior Alexa Hinkie have an exceptional knockdown jumper, while Moukas has outstanding court vision and great ball-handling skills.
Baker’s tenacious defense and speed embodies the team’s spirit and never give up attitude and demeanor. Talking to members of the team you can tell that they believe this season is theirs to win and they really believe in the team and their ability.
While the team has several extremely talented players, they all work together very well and are able to do tremendous damage when they are all on the same page. All the players are good at something and they are able to use their strengths together to win basketball games. Sophomore Nia Baker said “We are a team filled with talent. A team that is very dynamic and complements each other in a variety of ways.”
After their first game, Baker elaborated on this sentiment saying “Even with only playing one game so far we know where everyone is on the court and all bring so many strengths to the team.” You can tell by talking to players that they are confident in the team’s ability and each other. As Baker said their complementary skill sets allow the player’s styles of play to mesh together and a team whose players have a variety of different strengths will inevitably go far.
The Coaches also work tirelessly to help the team and its diverse players along. “The Coaches know what our team is capable of,” noted Baker. “They push us every practice in order to make us better.”
While the season is still in its infancy, and the girls still have a long way to go, they are ready for what lies ahead. While basketball is one of the most competitive sports on the Long Island Hills, West has continuously thrived and fought hard against premier competition. This year the girls will look to not deviate from the norm but will look to get further than they have before. This season the girls are due for a championship, and nothing will stop them.

Alexa Hinkie is the most lethal scorer and one of the team’s captains. Her natural scoring ability and accurate jump shot, coupled with her intelligent shot selection make her a premier player. Hinkie is also extremely solid on the defensive side of the ball. She is a tough defender who does not let an inch up and could be described as one of the best two-way players on the team. She sees the court very well and is able to make tremendous passes to set her teammates up for scoring opportunities. Her energy is described as infectious. She is a true leader and a well-respected member of the team for her attributes on and off the court.