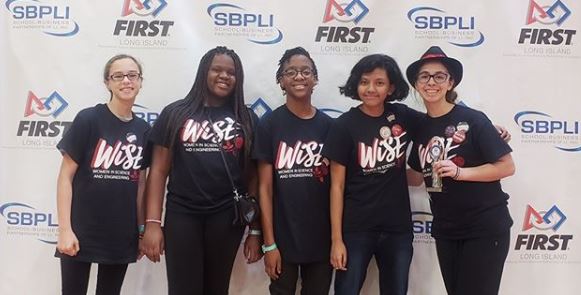 Sunday, January 13th, the Half Hollow Hills FIRST Tech Challenge (HHH FTC) Robotics club attended their second of three qualifying matches in their season. Here, they were able to receive numerous accolades for their outreach and robotic accomplishments over the course of their season.

The Robotics Club consists of five competitive FTC robotics teams. In order of seniority (not superiority) they are as follows: VEGA 7407, Theoretically Impossible 8108, Rise 8109, WiSE 8110, and Dagaz 12378.

Every September, these teams receive a robotic challenge from FIRST, a non-profit organization which hosts several worldwide robotics competitions. The challenge will involve a playing field and an objective for the robot to complete. For four months, these teams build and program their robot for this challenge, while also hosting events and fundraisers to support their team and their team’s mission to better the community. All events and meetings must be documented in an engineering notebook which will be judged during competitions.

Throughout the season, teams face many challenges and they are expected to overcome them in the most efficient way possible.

“FIRST’s mission is important because not only does it work to widen the STEAM community and the knowledge of future innovators, but it works to make all aspects of society better with the help of future creators.”

The most fulfilling part of robotics is found not only through the building of robots, but also through the building of relationships with fellow members. HHH FTC is much more like a family than anything else. According to Arjun Sahansra [10], “we [HHH FTC Robotics] are the definition of a family […] everything from joking about [Mitch] the coach, to staying up until 3 AM to work together on the engineering notebook […] We have this really strong bond that you won’t find in many other clubs.” Being a part of this club is much like being a part of a family and this is what makes these teams so successful.

Characteristics of a ‘Good Robotics Kid’

Members of the Half Hollow Hills FIRST Tech Challenge Robotics club were asked what characteristics make a kid best suited to robotics. Here were some of the best responses:

“Someone who can take initiative and is not afraid to learn on their own […] The best team members are not the ones who know the most, but the ones who are able to teach themselves.”

“Excitement and dedication are key aspects of robotics kids. You could be in robotics with any GPA and any level of experience.”

“[A robotics kid is] a dedicated member who wants to both help the community and enjoy the engineering process alongside robotics.”

“A good robotics kid needs dedication, commitment and a lot of passion.”

At their first qualifier at Lutheran High School, WiSE 8110 received the Connect Award for their community outreach efforts and VEGA 7407 was one of three teams in the competition’s winning alliance. At their second qualifier at Nassau Community College, Dagaz 12378 received the Motivate Award for their spirit and Theoretically Impossible 8108 qualified for the LI Championships.