Home School News Hills West Sits Atop The Suffolk County Throne With A Win Over... 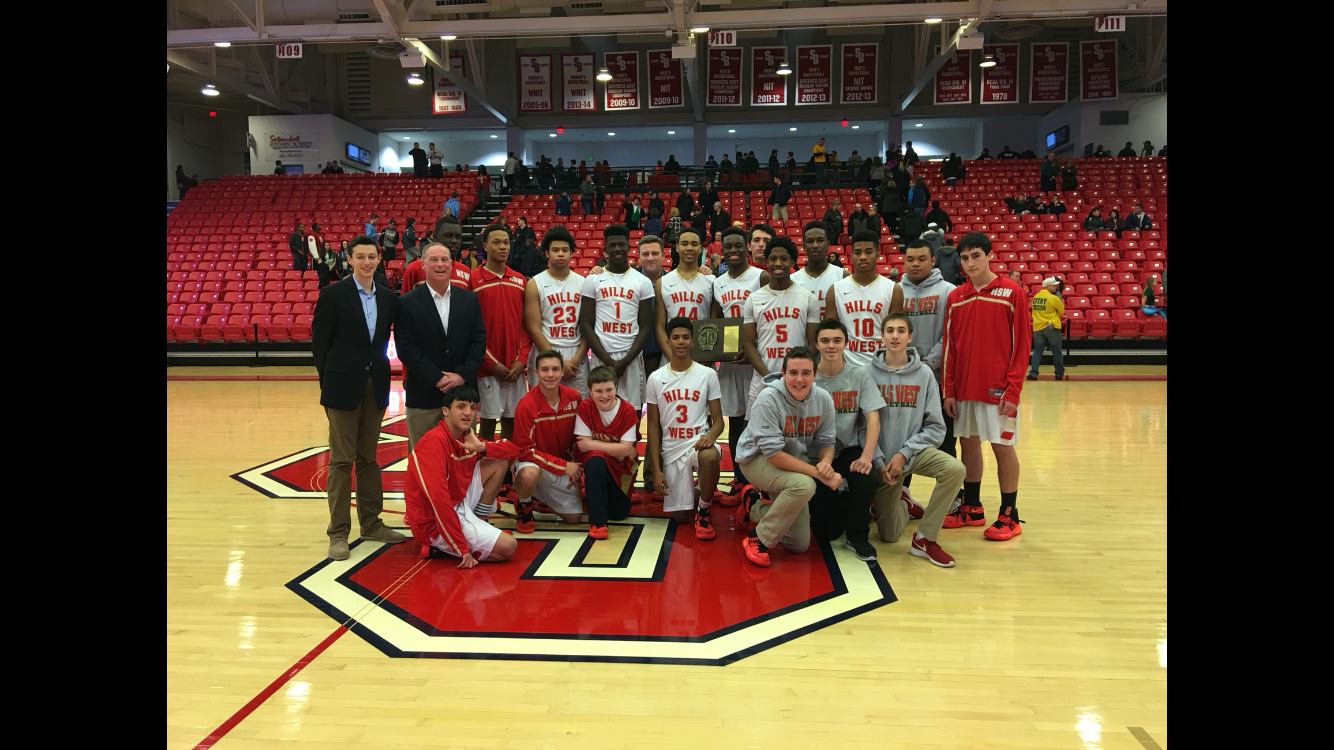 Hills West captured the overall Suffolk County championship at Stony brook university with a finish of 57-56. What this game didn’t have in “importance”, it made up for in how the game finished. This game wasn’t an elimination game, had no effect on either teams chances to make the final four in Glen Falls.  This game was a back and fourth battle that came down to the last second.  West had four players in double digits, and Richard Altenord came in clutch hitting two free throws with 5.2 seconds left giving them a one point lead. This put Harborfields down for good. This was a good test for West to prove that they are definitively the best team in Suffolk County

Perhaps the most impressive stat of the game came from the Harborfields side. They were able to hit eleven three pointers which accounted for well over half their points. Their ability to shoot from that range single handily kept them competitive. Malcolm Wynter and Rob Pecorelli led the way with four threes. Wynter finished as the leading scorer for both teams ending with twenty points, and Pecorelli  finished with ten. Danny Morgan had two threes and Kyle Stolba had one. In addition they were able to rebound the ball very successfully despite their obvious size disadvantage.

The first quarter ended with an 18-18 tie, but West was able to pull away out-scoring them 14-6 in the second quarter. All of this culminated for a halftime score of 32-24. Kian dalyrimple led the way for West finishing with 15 points. Cameron Jordan wasn’t far behind putting up 14 points. However, it wasn’t all rainbows and unicorns for West. The third quarter is where the momentum started to flip. The Colts Foul trouble and inability to score allowed the Tornadoes back into the game. The Colts let up the most points in the third quarter than any other one with twenty, and in turn they were only able to score thirteen. The quarter mercifully ended for West as they were still able to keep a one point lead. Anyone in the stands was able to see that this game was going to come down to one last shot. Who was going to win was yet to be seen.

The fourth quarter was the one that had the least amount of scoring in it, but however was by far the most intense. Matt Asenjo was able to provide a much needed spark hitting back to back jumpers that put the Colts up 55-53 with 1:21 left in the game. The tornadoes responded a little over thirty seconds later when Wynter hit one of his four threes and put the crowd in absolute amazement. Now it was The Colts turn to pass the test, and did so by all accounts. Fourteen seconds later Alternord sunk both his free throws giving West a one point lead. With one final opportunity Wynter through up a desperation shot to no avail, and the game ended with a score of 57-56

This was not one of West’s prettier games, but it’s only in these kinds of games does a team show it’s true colors. They showed heart and most importantly resilience. The road does not stop here as everyone will tell you the goal from day one was to bring home a state title. This was just another notch under their belt to prepare them for what will come next. It only gets harder from here. West will face the Nassau AA champion at 3:30 p.m. on March 6th at LIU post.