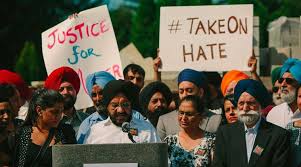 The shooting of Deep Rai, a 39 year old Sikh man in Kent, Washington has rattled Indian and Sikh communities as well as citizens of the World. The victim was working on his car in his driveway when a masked man approached him with a gun. The suspect threatened the victim and demeaned him, remarking that the victim should go back to his country, before pushing him to the ground and taking out his weapon. The victim lost consciousness and was shot in the arm, but has no life threatening injuries. The victim recovered in a private hospital before being discharged Saturday, and is expected to make a full recovery. The victim is a US citizen, originally from Punjab, India, and is married with three children, and a career in the construction industry. The shooter was described as a 6-foot-tall, white man with a stocky build by the victim to Kent police, who are now investigating the shooting as a hate crime alongside the FBI.

The disturbing event is particularly shocking due to its proximity to another shooting at Austin’s Bar and Grill in Olathe, Kansas in which an Indian man was killed and another was injured by a gunman who told them to “get out of my country” before opening fire. Sikhs have been the target of many attacks in the U.S., the most prominent being the shooting in a Sikh gurdwara in Oak Creek where a lone gunman, reportedly a white supremacist, opened fire, killing seven and injuring three more. Sikhs are identified by their turbans and beards, which are required by their religion, and are often wrongfully perceived to be muslim. The attacks are said to be a product of Anti-muslim backlash after 9-11 that has expanded to include Sikhs. ¨It’s a complete case of mistaken identity,” said Rajdeep Singh of the Washington, D.C.-based Sikh Coalition, “When people look at me with a turban and beard, the first thing that comes to mind is, `That guy looks like Osama bin Laden.’ “

The rise in hate crimes towards people of different ethnicities, religions, and sexual orientation is alarming and disturbing. Jasmit Singh, a Sikh community leader in Renton, Washington calls on Sikh and non-Sikh Americans to address pattern of anti-immigrant sentiment and xenophobia across the country. “This is not a Sikh-American issue, a Muslim-American issue or a Jewish-American issue. It’s really an American issue,” he said. “What do we want America to look like and what are the values that it should reflect?”