Home Politics Trump: “It is Time to Officially Recognize Jerusalem as the Capital of... Eleven months ago, during Former President Obama’s presidency, the United Nations voted for a resolution that denied Israel the right to construction in the West Bank. About a year later, the federal government’s support seems to be headed in an entirely different direction. President Trump has committed himself to a pro-Israeli agenda since his 2016 campaign. Consequently, Trump has had overwhelming support from Israeli Prime Minister Benjamin Netanyahu.

Trump has been committed to preserving and strengthening the relationship between the United States and the only democracy on the Arabian Peninsula at the expense of criticism from many Americans. Jerusalem is recognized as the holy land of the Jewish, Christian, and Islamic religions. These Abrahamic religions all have holy sites within this sacred city. For Jews, the Western Wall, the remains of the Second Jewish Temple, is considered one of Judaism’s holiest sites. For Muslims, the Dome of the Rock on Temple Mount is recognized as one of Islam’s most significant sites. For Christians, the Church of the Holy Sepulchre is viewed as one of Christianity’s most important sites. 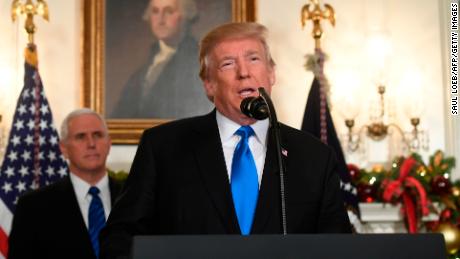 e capital of Israel. The United Nations had proclaimed Jerusalem as an “international city” as a result of the many religious claims to the city. Consequently, the many nations that have established embassies in Israel, including the United States, have all established their embassies in Tel Aviv. However, some nations, including Denmark and Finland, recognize Jerusalem as the capital of Israel but have decided to place their embassies in Tel Aviv to avoid controversy.

However, President Trump, as usual, was not afraid to create a controversy. On December 6, 2017, President Trump officially recognized Jerusalem as the capital of Israel. Additionally, Trump recognized the potential opposition to his statement:

“With today’s action, I reaffirm my administration’s longstanding commitment to a future of peace and security for the region. There will, of course, be disagreement and dissent regarding this announcement. But we are confident that ultimately, as we work through these disagreements, we will arrive at a peace and a place far greater in understanding and cooperation. This sacred city should call forth the best in humanity.”

As a result of this controversial action, protests within the United States and violence within Jerusalem have taken place. Within Jerusalem, thousands of Palestinians swept the streets to protest this monumental event. Many threw rocks at Israeli forces and were met by Israeli fire. NPR’s Daniel Estrin reports, “Palestinian health officials say at least one Palestinian was killed, and at least 15 were wounded including two infants. One is reportedly in critical condition.” Additionally, airstrikes against the southern Israeli city of Sderot were attempted but ultimately failed. Within the United States, many swept the streets of New York City proclaiming “free free Palestine” and “end the occupation.”

Clearly, this action has divided the international community to an even greater extent. However, President Trump does support a two state solution if both sides are willing to agree to support that concept. Only time will tell whether peace will finally be achieved between Israelis and Palestinians after decades of feuding.

During a speech at the Israel’s Foreign Ministry Netanyahu proclaimed,”I would like to announce that we are already in contact with other countries which will issue a similar recognition.” Netanyahu leaves the international community wondering which countries, assuming this report is true, will speak out next.