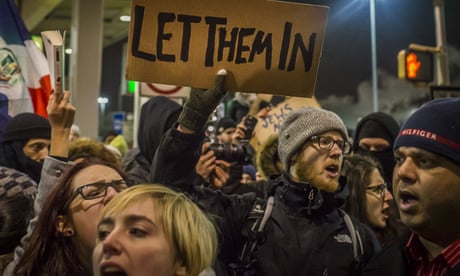 President Donald Trump’s immigration ban sent shockwaves throughout the world last friday, inciting fear and anger in American citizens and foreign peoples. The executive order essentially prohibits people from seven predominantly muslim countries from entering the United States. The countries affected were Iran, Iraq, Libya, Somalia, Sudan, Syria, and Yemen and the ban was placed for 90 days for nationals and 120 days for refugees. This ban is widely criticized by liberals and deemed a “muslim ban”, while some conservatives praise the order as it “keeps America safe”. Nonetheless, protests ensued nationwide against the detainment of those who arrived in America and the halt of immigration and travel. Many are personally affected by the ban, and see it as an embodiment of hatred towards muslims.

According to President Donald Trump, the purpose of the order is to protect the United States and its citizens by not allowing those from problematic countries to enter the US. Unfortunately, his ban may have had critical consequences. Former jihadists contend that terrorist organizations such as ISIS and Al Qaeda intend to capitalize on fear and anger towards President Donald Trump’s order. ISIS is in a weaker state due to loss of fighters, infrastructure, finance, and territory, but many wonder if this order will give them more power for propaganda. ISIS desires a Islamic state run entirely by sharia law, and propagates the idea that Muslims and non Muslims should be separated. The travel ban sends a message that America is barring muslims, or that America is against Islam. Those who feel rejected and marginalized are more inclined to join extremist groups, which is why many feel that President Trump’s order was counterproductive and against American interests.

Regardless of how much a person agrees with Donald Trump, or wants to protect our country, the stories of detainees are heartbreaking. Travelers were unable to reunite with loved ones, others were detained and questioned for several hours, and some were even instructed to get back on the plane and go right back where they came from. The implementation of this hasty ban was poor, and the detainment of American citizens coming from one of the  banned countries was unwarranted. John F. Kennedy National Airport saw large protests of people chanting, “ No hate, no fear. Immigrants are welcomed here!”. Is that what has become of our country? Some are starting to wonder if the land of immigrants is becoming the land of fear and marginalization. Regardless, it’s hard to imagine what ran through the minds of immigrants and travelers who gazed upon the Statue of Liberty from above, but now have to question the veracity of America’s promise to immigrants.